16 Fun And Interesting Facts About The Bassoon You Should Know

The bassoon is a double-reed instrument and the largest member of the woodwind family. It’s considered a low-pitch instrument, therefore, it plays the lowest notes.

An instrument with a double reed means it has two pieces of bamboo cane tied together with a wire and thread. There’s a small gap between the two reeds so that when you blow through, the air passing through them causes them to vibrate against each other. This vibration is what produces the wonderful, unique sound of the bassoon.

There are so many interesting things about this distinctive instrument, which is why we’ve put together 17 facts about the bassoon you’ll probably enjoy learning about.

Let’s get into it!

1. Bassoons Have a Unique Anatomy 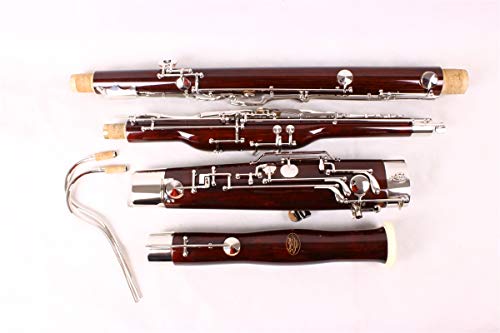 Bassoons are made up of five parts.

The S-shaped crook or bocal is made of metal, silver, and sometimes platinum or gold.

Reeds are attached to the end of the crook.

The body consists of four parts.

The double joint or boot contains the U-shape and leads to the long joint, which is the longest part of the instrument.

Then, the tenor joint is directly connected to the crook.

Almost all the key work and holes are in these three parts.

2. Bassoons Stand Out in the Woodwind Family

The bassoon is an extremely long instrument, measuring roughly 53 inches in length.

Because the instrument’s long tube has a folded structure, it’d expand to roughly 102 inches if fully extended.

What makes the bassoon different from other woodwind instruments, like the clarinet and the flute, is its number of keys.

The bassoon has nine keys for the left thumb and five for the right.

Bassoons have a conical bore. This means that their long tube is formed in a conical shape.

This helps in producing the unique, deep sound that makes bassoons stand out.

The opening at the very top of the bassoon is called the bell.

The only note that comes out of the bell is the B-flat, which is the lowest note a bassoon can produce.

4. There Are Two Types of Bassoons

There are French bassoons (Buffets) and German bassoons (Heckels).

According to William Spencer in “The Art of Bassoon Playing”, most bassoonists favor German bassoons over French ones.

This is because Heckels produce a better sound and are more budget-friendly.

There are a few distinctions between them both.

The buffet has remained very close to its earlier forms while the Heckel has grown more modern.

This is why French bassoons have a slightly older tone than German bassoons.

Finally, Buffets are typically constructed of rosewood, whilst Heckels are built of mahogany wood.

5. Bassoons Are Also Called Clowns of the Orchestra

The bassoon has been labeled the “clown of the orchestra” because it creates a sharp, detached sound.

Its low register is viewed as humorous by some people.

You may not have known this but the bassoon is the instrument you heard in the cartoons you grew up watching.

The bassoon’s tone was thought to be so hilarious that Mozart composed passages just for it!

6. Not Everyone Can Be a Bassoonist

If you want to play the regular bassoon, you must be tall!

A bassoon player’s legs must be long enough so that their feet can reach the floor when they sit down.

They must also have big hands to reach all the tone holes and thumb keys.

If an aspiring bassoonist doesn’t have big hands, there are other types of smaller bassoons available.

7. Most Bassoonists Make Their Own Reeds

Most reed players handcraft their own reeds because, according to them, the store-bought ones are of cheap quality and considered a waste of money.

It’s actually a pretty frustrating process. You can make 10 reeds and throw most of them away.

You also need to test each one of them on different ranges to determine if it’s consistent or not.

Because reeds are made of bamboo or cane, they are sensitive to changes in temperature and humidity, and can quickly expand and lose their durability.

This is why bassoon reeds need proper care.

Reeds must be rinsed in room temperature water every day. If the water is too cold or hot, the reeds won’t vibrate or produce the sound they should make.

After you’ve finished playing your bassoon, you must thoroughly dry the reeds to remove any excess water or moisture.

This should keep molding at bay.

9. Reeds Come in a Variety of Strengths

Reeds are available as soft or medium-soft, medium, medium-hard, and hard.

The harder the reed is, the more resistance it has. This makes harder reeds more convenient for advanced bassoonists.

Reeds also come in a variety of lengths, with 1 inch from the collar to the tip being adequate for beginner bassoonists.

10. The Bassoon Has A Bigger Sibling

The regular bassoon and the contrabassoon are two different sizes.

The contra has a folding design and comprises nearly 10 feet of tubing, making it much, much larger.

It has a lead pipe that goes all the way up to the crook, which is the piece that connects the instrument with the reed.

Contrabassoons can produce notes all the way down to a bottom B-flat note.

Also, the contrabassoon differs from the normal bassoon in being an octave lower.

11. The Bassoon Has an Important Role in the Orchestra

The bassoon, as the name implies, serves as the woodwind section’s tenor and bass.

It has a rich and round tone and therefore acts as good support for the other instruments and the orchestra.

Bassoons are occasionally used as solo instruments for special effects because they have the ability to produce both joyous and sorrowful tones.

This makes them the perfect instruments to include in movie soundtracks!

For example, one of the most recognizable movie soundtracks featuring the bassoon is probably The Sorcerer’s Apprentice from Fantasia

12. The Contrabassoon Is One of the Lowest Instrument in the Orchestra

The contrabassoon, on the other hand, plays a distinctive role in the orchestra.

While, the bassoon plays as the foundation for the woodwinds, but the contrabassoon goes below that.

Because it’s such a low instrument, some composers do not include it at all. It’s almost never used because it doesn’t sound very pleasant.

When they do use it, it’s to play incredibly low, hefty notes.

13. The Bassoon Has Various Ranges

Another thing you should know about the bassoon is that it has a wide range.

This range begins at the low end with B1 and extends all the way to F5.

The lower register is frequently used as a foundation because of its deep sound.

Alternatively, the middle register of the bassoon has a more powerful tone than the lower register.

Finally, the upper register has a thin, nasal tone and lacks the clarity of the other two registers.

14. There Are Many Playing Techniques

The bassoon can be played in a variety of ways with a number of extended techniques.

Standard techniques like vibrato are very common but you can also play harmonics, glissandos fluttertonguing, quarter tones and multiphonics

As well as some interesting extended techniques, the basson is also a very flexible instrument which it comes to tounging techniques.

Considering its size, the bassoon is a surprisingly fast instrument.

The bassoon, like any other double-reed instrument, has a variety of tongue techniques.

It can be played with single, double, or triple tonguing.

Bassoons are descended from sordones, which are rare wind instruments that was introduced in the 16th century.

Around the 1600s, the earliest bassoon model was relatively simple, resembling a large recorder.

Only bass lines were played on it, occasionally with two oboes. In the orchestra, it didn’t truly serve a solo function.

People began to understand that bassoons could be played solo in the 1800s, and they started writing music for them.

Compared to prior models, the current bassoon has a substantially larger number of keys.

We hope that you enjoyed learning all 17 fun facts about the bassoon as much as we did!

To recap, the bassoon is a low-pitch instrument and a member of the woodwind family.

What’s even more interesting about it is that it’s often called the clown of the orchestra because it’s frequently used to produce funny noises or sound effects.

That was definitely our favorite thing to know about this unique instrument!

Written by Laura Macmillan
Laura has over 12 years experience teaching both classical and jazz saxophone and clarinet. She now resides in California where she works as a session and live performer.