Whether you’re an experienced flautist, or a beginner just starting out, there is always more you can learn about your instrument. Did you know, for example, that the flute is probably the oldest instrument in the world?

This article will take you through some fantastic fun facts all about the flute family. This could be a great starting point for further reading, or simply a chance to learn a few interesting facts. Either way, you will certainly know a lot more about our favourite instrument after reading this article.

1. The Flute is ‘Probably’ the Oldest Instrument in the World!

What a statement, but as far as historians can tell, this is actually true, the Flute is probably the oldest instrument in the world.

An artefact was found at the Divje babe archaeological site in Slovenia in 1995 that experts believe is a flute played by neanderthal man.

It’s believed it was the femur bone from a cave bear that the player has carved tone holes into.

Read more about the history of the flute here.

The flute is mentioned in many Greek myths, including one that tells the story of the flute’s ‘invention’ by the goddess Athena.

When Athena ‘played the flute with all her might’ her face apparently contorted and her beauty was marred, so she threw away the flute she had made.

A drastic solution for sure!

3. It was Good Enough for the Gods

In contrast to the views of the Ancient Greeks, Hindus believed that the flute had spiritual powers and compared it to the deity.

Their God, Krishna, is frequently depicted playing a flute and it is believed that the sound of his flutes brought young ladies out to dance with him!

4. It Hasn’t Always Been This Way

The modern Concert Flute has an intricate mechanism of keys, pads and springs but in ancient times, the flute was made of bone or wood and consisted merely of a ‘tube with holes in’.

It has certainly come a long way since then!

Look at the changes below!

5. Not Just Any Old Shiny Metal

Many of the changes made to the design of the flute can be attributed to the great nineteenth century flute maker, Theobald Boehm.

He laid the foundations for the modern key mechanism and made a lot of improvements to ensure the instrument would be in tune.

Boehm used only the best German silver for his flutes, as he believed it to have the best acoustic properties.

Nowadays flutes are usually made from precious metals such as nickel, silver-plating, solid silver, gold and even platinum and their prices reflect this.

Back in history though, our ancestors used bone and wood and now there are even plastic versions available to help young players get started.

The flute is closely related to the recorder but, the instrument we usually call a ‘flute’ is in fact a transverse flute, held across the body.

The instrument we think of as a recorder is also a flute but is held in front of the body and blown using a mouthpiece.

They seem worlds apart, yet their origins are common and the term flute was used to mean both types of instrument right up until around the 17th century.

7. A Family of Instruments

Did you know that the Concert Flute is not the only type of flute but is part of a family of instruments.

Throughout history, flutes have been made in a range of sizes so that they can play in different keys.

Now that the instrument is fully chromatic, there is no longer any need for this, but flutes of different sizes still exist so that a wider range of pitch can be covered.

The main ones are the bass flute; alto flute and piccolo although a contra-bass flute and even a subcontrabass flute also exist.

The piccolo and concert flute are regular members of the modern symphony orchestra with occasional guest appearances by the alto flute.

Bass and contra-bass flutes are usually found in flute groups (known as flute choirs) which make an amazingly rich and diverse sound.

The famous flute player, James Galway, also became widely known as ‘the man with the golden flute’ because, back in the 1970s, gold flutes were rare and his instrument was rumoured to be worth over four thousand pounds, a small fortune in those days.

9. Around the World In Eighty Flutes!

The flute is an instrument that is played across the world, from Canada to Argentina and from Australia to northern Siberia.

It was even once played on Antarctica back in the 1970s!

These flutes vary considerably across the world and include transverse flutes like the Irish flute; front held flutes like the Japanese Shakuhachi and the Native American Flute; pan flutes (popular in Greece, North and South America, Africa, Thailand and the Pacific) and bamboo flutes such as the Chinese dizi and the Bansuri found in India, Pakistan, Bangladesh, Sri Lanka and Nepal to name just a few!

The flute is a unique instrument for a number of reasons.

It is the only member of the woodwind family which is not usually wooden, and it does not have a reed.

It is also the only instrument that is held sideways and blown without a mouthpiece that goes inside the mouth.

The sound on a flute is created by blowing across the hole, not down it, requiring considerable skill by the performer.

For this reason, many flautists claim that it is more difficult to play than the other wind instruments, but this is most definitely a matter for debate!

There are also some very unusual flutes played in some unusual ways, some of which are pictured below.

Western classical music is just the tip of the iceberg where the flute is concerned, it also features in jazz, pop, folk and world music and in films as both a solo instrument and as part of small and large groups.

It is truly versatile, equally at home soaring above the orchestra in a romantic symphony, in a marching band or soloing at Ronnie Scott’s.

Unlike many instruments, it can also be packed into a compact case and easily transported, making it the ideal choice for the travelling musician.

There have been a couple of truly amazing world records involving the flute in recent years.

The instrument is 3.63m long and was used to play the Indian National Anthem at a public event.

In 2017, it was the turn of Katherine Brookes to set a record, she played the flute without stopping for a staggering 27 hours, 32 minutes and 32 seconds, beating her own previous record by nearly two hours and that of her rival, Indian Murali Narayunan by just over half an hour.

Apparently the pads of her flute became so waterlogged that the instrument was almost unplayable and Katherine herself required medical treatment to relieve muscle cramps.

There are so many amazing facts about the flute but the above are definitely my favourites.

What other instrument can claim to be the oldest in the world, truly international, versatile, portable, beautiful, unique and even a record breaker?

To all of you ‘flutterers’ out there, I hope you have enjoyed reading these fascinating facts and let us know if you have any others. 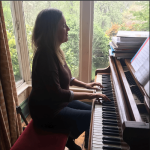