15 Fun And Interesting Facts About The Xylophone You Should Know

The xylophone is one of the most interesting instruments out there, often recognized for its bright and fun sounds. While it seems like a somewhat comical instrument, the xylophone has a long history to back up its significance in music.

Essentially, the xylophone consists of a set of tuned keys arranged similarly to the keyboard of a piano. If you’re intrigued by this unique instrument, the following are some fascinating facts about the xylophone that you might not know about.

1. The Origin of the Xylophone is a Mystery

No one can really tell for sure where the xylophone has originally come from.

To this day, the exact birthplace of this instrument remains a mystery despite being present in various cultures such as the traditional music of Africa, Southeast Asia, Melanesia, Europe, and more.

Back around 2000 BC in China, a type of wood-harmonica instrument is reputed to have existed, featuring 16 suspended bars made out of wood.

About the same time in Hindu territories, an instrument similar to the xylophone referred to as the ‘ranat’ is also said to have existed.

Additionally, proof of the common use of xylophones in Southeast Asia is seen in various temple illustrations showing musicians playing look-alike instruments.

2. The Xylophone Goes by Many Names

As a notable member of the percussion family of instruments, the xylophone has been around for a long time thanks to its simple construction concepts.

Consequently, this led to the existence of different versions of the xylophone across many cultures.

For example, the xylophone was referred to as “wooden clatter” in Europe around the year 1511, which changed to “straw fiddle” later on.

Other names for the xylophone include:

3. The Xylophone is No Longer Exclusive to Wood

As with many percussion instruments, the xylophone was first made out of wood.

In Asia, the early versions of the xylophone were often built using wooden bars mounted onto gourds.

With the development of mankind and the advancement of construction techniques, the xylophone is no longer exclusive to wood.

Today, we can see xylophone frames made out of metal as well as wood.

4. The Xylophone has Uses Beyond Making Music

Besides being part of orchestral works and creating beautiful music, the xylophone has been reportedly used for a variety of different purposes.

For example, people in Senegal used the xylophone to maintain the well-being of their gardens and crops.

That’s because the sound of said instrument scared -and consequently drove away- monkeys, birds, and other animals/pests.

Another cool use of the xylophone is in movies where it’s played to produce certain sound effects such as simulating the noise of bones clinking together.

5. The Xylophone and the Marimba are Cousins not Twins

It’s quite common to confuse the xylophone with the marimba, but you should know better than that after this article.

The xylophone features thick bars usually made out of hardwood and generates shorter yet much sharper notes than the marimba.

This is why musicians often use both instruments together to end up with a more varied and textured tone.

At one point during the 17th century, instrumentalists from Africa traveled to Central America where they introduced the xylophone.

With the influence of the culture down there, the instrument underwent some modification and became known as the marimba.

Nowadays, the marimba remains quite popular across Mexico and Central America. In Guatemala, it’s viewed as the national instrument.

6. The First Proof of the Xylophone Dates Back to the 9th Century

Although it’s believed to be a lot older, the first definite evidence of the existence of the xylophone was found in Southeast Asia back in the 9th century.

Since they’re primitive, these instruments were basically a bunch of wooden bars that the player laid across their legs.

With time, the initial design started to evolve and it featured the addition of resonators at the bottom of the bars to boost the longevity of the generated notes.

In the beginning, the resonators were gourds that had been hollowed out.

Also, the instrument sat on a stand.

7. The Xylophone Took off in the 14th Century

The popularity of the xylophone was first sparked in the 14th century, that’s when things kicked off for the percussion instrument.

Over the following hundreds of years, the xylophone existed in numerous types as instrumentalists used different materials to build it.

For example, natural rubber and bamboo. As such, many variations of the xylophone came about and several of these stuck around to this day.

Some of the most widespread versions of the xylophone include the marimba, the mbila, the gambang, and the gyil.

8. Europe Met the Xylophone During the Crusades

No one knows the exact date, but it’s established that the xylophone made its first appearance in Europe at a certain point during the Crusades.

Ever since its introduction, the xylophone became an integral part of folk music, which skyrocketed its popularity.

This doesn’t dismiss the fact that these versions of the instrument were still rather basic and lacked resonators.

A wide array of xylophone designs were developed in Europe including Michael Josef Gusikov’s creation.

It consists of a four-rowed instrument featuring the same notes a piano uses.

Gusikov’s xylophone was a key step towards the birth of the modern xylophone. Not only was he a distinguished virtuoso, but he also exposed concert audiences in Europe to the instrument.

10. The Modern Xylophone was Created in the 19th Century

The modern xylophone, also referred to as the orchestral xylophone, was first introduced in 1886 when Albert Roth revealed his idea of having a two-rowed xylophone equipped with a chromatic pattern for notes.

From that point, the xylophone as we know it today was created and soon became a common instrument in numerous orchestras and theatre performances.

In 1903, the mass production of this xylophone began at the hands of the American company John Calhoun Deagan.

Soon after, the modern xylophone became present in almost every orchestra.

The construction of the bars of a xylophone is just as intriguing as the history of the instrument itself.

Material-wise, they’re typically made out of Kelon – a type of fiberglass- or rosewood.

The bars of the xylophone also come in different lengths, which results in the production of different sounds.

The bars of a xylophone are attached to one another and secured in place via a cord or string, but they still have enough room to vibrate when you strike them with the mallet to create a sound.

Each bar has a resonator underneath to amplify the sound.

12. The Scale System of a Xylophone Depends on its Origin

That’s right, xylophones are tuned to various scale systems according to their origin.

Such scales include chromatic, diatonic, pentatonic, or heptatonic.

As a rule of thumb, the bars of a xylophone are arranged from low notes (longer bars) to high notes (shorter bars). 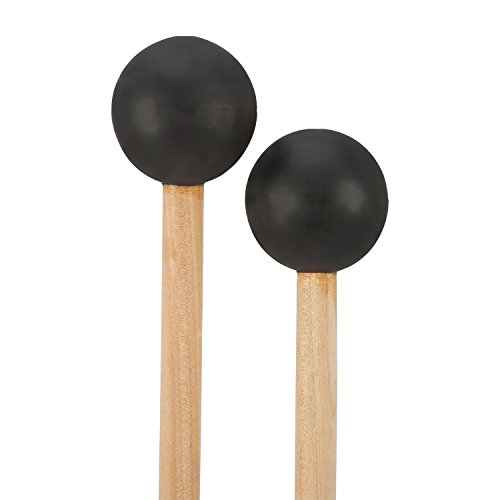 Mallets aren’t created equal; they’re made out of different materials, each of which elicits a sound of different characteristics.

To achieve a softer effect, mallets made out of medium to hard rubber or very hardcore yarn are used.

To generate lighter tones on xylophones, musicians usually use wooden-headed mallets built from hardwoods such as ebony, rosewood, or birch.

14. The Xylophone is the Vibraphone’s Parent

The xylophone is considered a precursor to the invention of the vibraphone, which was first constructed in the 1920s.

However, it wasn’t until the 1940s that the vibraphone became a popular sound in Jazz.

Before that, bands of this music style often used the xylophone.

Once again, the xylophone regained popularity in the 1970s in ragtime music.

15. The Xylophone Debuted in the Orchestra in 1893

In 1893, the xylophone made its first appearance in an orchestra.

It was used in the opera Hansel and Gretel by the German composer Engelbert Humperdinck.

There you have it, 16 interesting facts about the xylophone you might not be familiar with.

As you can tell, this percussion instrument has a rich history and a versatile use that you simply can’t ignore.