15 Fun And Interesting Facts About The Marimba You Should Know

The marimba is one of those instruments you may not have heard of, but don’t worry; we’ve got you covered. It’s a super interesting instrument with a ton of history and fun facts to explore and discover.

In this article, we’re going to dive into 15 fun and cool facts about the marimba. Whether you want to learn how to play the instrument or are just interested in learning more, this is the best place to start your journey.

1. The Marimba is Pretty Old

People use marimbas all around the world, from Latin America to Africa and Asia.

However, the exact history of this beautiful instrument is unclear.

Some believe the instrument originated in Southeast Asia in the early 14th century; however, it could have come from Africa a bit earlier.

Even the spread of the marimba around Latin America isn’t as clear as you might think.

One of the prevailing notions is that African slaves brought or built the instrument in the 16th century.

Or, it’s possible Africans brought it to the continent during pre-Columbian expeditions.

Since marimbas makers in Africa and the colonies in Latin America had different materials available, the sounds they created varied dramatically depending on where you went.

For example, the wood and materials from Africa aren’t the same as those available in South America.

The stuff you use to build an instrument potentially affects its resonance, volume, pitch, and a plethora of other things, and the marimba is no different.

3. Marimba Isn’t the Only Name for This Instrument

While marimba is the most commonly accepted name for this xylophone-like percussion instrument, it’s not the only name you might hear it called.

For example, in many Latin American countries, the marimba is known as the marifon or the carillon.

However, maybe you can help the term “marimbist” pick up steam? Some people use that, but you won’t see it often.

5. The Origin of the Name Marimba is Pretty Cool

Although the instrument’s origins are murky, where the name came from is clear as day.

Marimba is a word of Bantu origin, one of the most prominent language families in Sub-Saharan Africa, with hundreds of mutually exclusive dialects spoken across many countries.

And ‘many xylophones’ is essentially what the marimba is, minus a few details.

6. The Marimba is Really Easy to Transport

The marimba is incredibly easy to transport to and from a concert hall or band practice compared to similarly-sized instruments.

Despite how large and expansive it seems, it weighs just around 100 pounds and breaks down into much more manageable pieces.

As a result, the marimba is an increasingly popular high school band instrument.

7. The Marimba Can Play Across the Musical Divide

If you search marimba songs on Google, you might get caught off guard by how many options are available.

It’s a relatively unknown instrument, so why are there so many songs available?

Since the marimba features a wide range of sounds, players can interpret an even more comprehensive range of works from composers of all genres.

You can find Mozart on marimba or even the Legend of Zelda theme song.

The instrument’s versatility means a skilled player can tackle almost any genre if they have it in their repertoire. 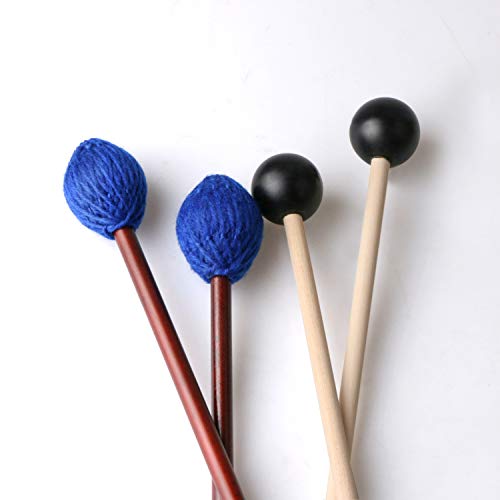 You wouldn’t be alone if you thought the size of a marimba player’s mallets doesn’t matter as much as the marimba itself.

However, the marimba’s sound is a partnership between its materials and the size and shape of the mallet striking the keys.

Larger mallets might create a more robust sound, while smaller ones will thin it out, making it slightly quieter but possibly more piercing.

The mallet’s materials matter as well, affecting the player’s articulation in significant ways.

Serious players often have different types of mallets on hand to achieve whatever sound they need to at any given time.

9. The Marimba is the National Instrument in a Few Countries

The marimba is more than just a cultural icon for many people; it’s a symbol of national importance.

Several countries in Latin America recognize the marimba as their national instrument, including Mexico, Guatemala, Costa Rica, and Nicaragua.

You can hear them played in national marching bands and many Independence Day celebrations.

10. The Marimba is Featured in Several Hit Songs

While you generally don’t hear the marimba in most mainstream songs, the instrument has made its way onto several noteworthy records over the years.

Bands like the Rolling Stones, Elton John, and ABBA have all used the marimba in their songs.

In Latin America, the marimba is often featured in many reggaeton and bachata tunes, among other genres that aren’t as popular in the United States and Europe.

According to Zulu legend, the marimba is the result of a tragic story of heartbreak and magic.

The goddess Marimba was cursed by a rival goddess after a dispute between the two arose over a lover.

She told Marimba that any husband she took would be dead within three days of their wedding.

After her second husband died, Marimba was so heartbroken that she strung keys together using an arrow and string.

According to the story, her songs became more and more beautiful the more heartbreak she experienced, until the death of her third and final husband.

12. Marimbas are a Recent Addition to Classical Orchestras

Though the instrument was popular in social settings and folk music throughout the world, classical conductors didn’t see the appeal for one.

French composer Darius Milhaud was the first to introduce the Marimba into a Western classical lineup with the 1947 Concerto for Marimba and Vibraphone.

13. The Largest Marimba Ever Built is Pretty Big

It holds the Guinness World Record and is on display in Chiapas, Mexico.

The largest marimba ensemble ever formed, on the other hand, consists of 403 people and is based in Hobart, Tasmania.

From the 13th or 14th century on, the marimba and similar percussion instruments were almost exclusively played sitting down.

All historical depictions of the instrument have the player kneeling or cross-legged.

It wasn’t until Mexican marimbists modified an old marimba in 1850 with stilts and resonance boxes that standing marimbas became popular.

15. Clair Omar Musser Popularized the Marimba in the US

While people may have known about the marimba in passing, most people in early 20th century America wouldn’t have seen or heard one in person.

Their defining performance was for the 1930 Chicago World’s Fair, broadcast around the globe.

Afterward, the marimba quickly entered the public consciousness and made itself comfortable.

Wrapping Up Fun Facts About the Marimba

And that’s the end of our list of fun facts about the marimba. Did you learn new things about this fascinating instrument?

Or do you know something about the marimba that we don’t?