The ukulele, an instrument that has seen a spike in popularity in recent years, is a small stringed guitar-like instrument. While popularized by Hawaiian cultural exports, it was originally created by the Portuguese and brought to the idyllic islands by immigrants looking for work in the 19th century.

Today, most people have a good idea of how a ukulele looks and sounds. But did you know there are lots of different types of ukulele? Keep reading if you want to find out everything there is to know about different kinds of ukuleles. In this post, we’ll dive into the origins and unique qualities that make each ukulele special.

The four most common types of ukulele are the:

Each one has a unique sound and qualities that make them more suited to different types of musicians. Let’s take a look at each one in more detail. 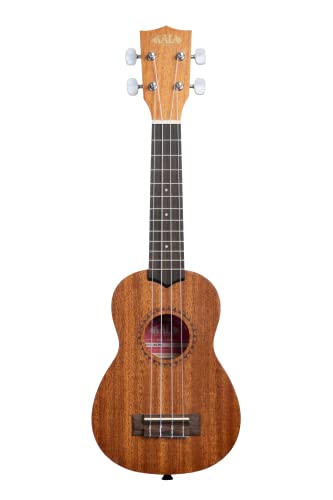 The Soprano Ukulele is the smallest variety of uke and also the most recognizable and prevalent.

As a result, it’s the perfect travel instrument as it fits in almost any bag and only weighs a couple of pounds at most.

The soprano ukulele features the highest pitch out of any other ukulele due to its size, shape, and number of strings.

While a common concern is that the strings and frets are too small for people with larger hands, the instrument is actually perfectly suitable for people of all hand and finger sizes.

The standard soprano ukulele is 21-inches long, has 12-15 frets, and tunes to GCEA.

It’s important to note that compared to other types of ukulele, the soprano tends to slip out of tune more quickly than other types.

However, tuning is more manageable than others as well, so this doesn’t cause most people many problems.

The Tenor Ukulele is the larger version of the soprano ukulele, giving you a louder, fuller sound with more range and options than the standard version.

Plus, the instrument is quite a bit heavier, meaning it’s easier to wield on stage or mess around in your free time.

However, as a result of its size, it’s not quite as portable as the soprano.

Because of its increased neck length and size, tenor ukulele players can also play higher notes on the fretboard.

This opens up a whole side of ukulele songs that are utterly unavailable to typical soprano ukes, making this the perfect option for concert players or if you’re starting to take your uke hobby semi-seriously.

The standard tenor ukulele is about 26-inches long, has 15-19 (or more) frets, and typically tunes to GCEA.

However, sometimes you may prefer to tune it lower to DGBE, which is entirely possible as well.

Somewhere in between tenor and soprano ukuleles, the Concert Ukulele has a slightly larger frame than most ukuleles you might see out in the wild.

While that does make it a touch less portable, you’ll find that a concert ukulele has a round sound that projects well even in crowded settings.

The concert ukulele has a neck that is typically one or two inches longer than the average soprano ukulele.

However, since it usually has fewer frets than a tenor, you won’t be able to hit the same high notes that you could with that type of ukulele.

Another thing about the concert ukulele that people love is the fret spacing.

It features a little more room in between each fret, making it a great option for people with larger hands and fingers.

If you’re looking for a traditional-style ukulele that gives you some more options than the soprano, then you might want to try out the concert ukulele. 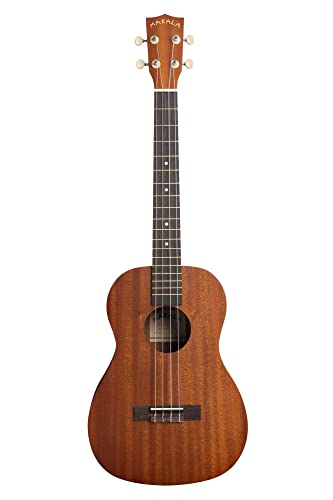 Able to achieve deeper tones than its counterparts, the Baritone Ukulele is the largest in the ukulele family and is often used to accompany full bands or stand out in a jam session.

While these low notes are interesting and useful, you do lose quite a significant portion of the higher tones that soprano, concert, and tenor ukuleles are capable of.

While someone invented the baritone ukulele in the 1940s, it’s unclear who the real creator of this magnificent instrument was.

In a tale as old as time, two men, Arthur Godfrey and Herk Favilla, both claimed to be the inventor of the baritone uke.

Godfrey was a television personality; Favilla was a third-generation luthier and a stringed instrument shop owner.

If you’re a guitarist, you may prefer the baritone ukulele as a travel instrument because it’s much smaller than the average guitar, and it has a more similar tone than other standard ukuleles.

The following types of ukuleles are variations on the standard soprano, concert, tenor, and baritone ukuleles that you’ll see in every music store.

While many stores also have these varieties, they are less common, and you might have to do a bit more legwork to find one you like.

The Pineapple Ukulele is considered a bit of a novelty item to some, but many musicians actually prefer it to standard soprano or concert ukuleles. It has a unique body shape that looks exactly like a pineapple cut in half and hollowed out.

While this might seem like an innocuous detail, it helps create a stronger sound than traditional body shapes.

As a result, pineapple ukes are the preferred shape for many soprano and concert players, especially for busking or some sort of performance.

People love the shape, and the sound cuts through noise better than standard models.

Samuel Kaialiilii Kamaka invented the first pineapple ukulele. He was the founder of the legendary Kamaka ukulele brand and is said to have shown friends his ideas for the new shape.

Apparently, it reminded them of the pineapples they grew up eating around the islands of Hawaii. 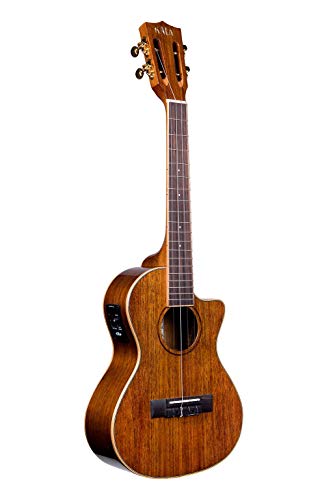 The Cutaway Ukulele is a common variety in many music stores and is an especially popular ukulele for players of all four main types.

Essentially, cutaway ukuleles always have a ‘cut back’ right shoulder. You can more easily play the top frets than if that part was still there, like with standard ukuleles.

You can find cutaway variations of the soprano, tenor, concert, and baritone ukuleles, so how the cut affects the sound will depend on what you’re playing.

While it does have a marginal effect on the roundness and depth of sound, cutaways mainly make it easier to play complex patterns on such a small instrument.

The Guitalele is one of the most popular “hybrid” ukuleles, where creators combine qualities from another stringed instrument into the compact form of a ukulele.

A Guitalele is a combination of a classical guitar and a tenor ukulele.

While you can play a good amount of chords with a standard uke, a Guitalele has 6-strings, giving you the ability to play a larger variety of chords.

A standard tenor uke already has a longer neck, so adding more strings gives you access to a much wider range of music.

However, a Guitalele’s tuning is different from a standard tenor uke and a classical guitar. It tunes to ADGCEA, raising the instrument’s pitch from a guitar but lowering it from a ukulele. 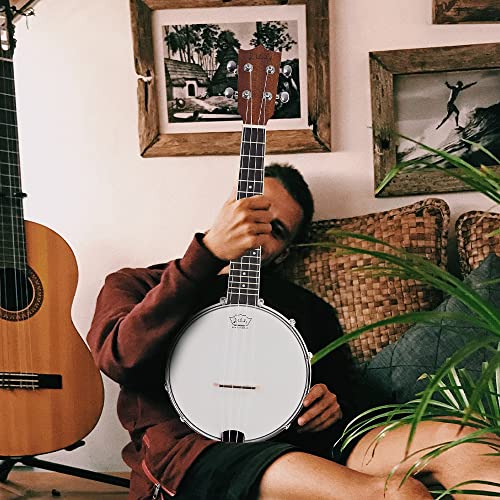 As you might have guessed, the Banjolele is an interesting cross between a ukulele and a banjo, a five-string instrument popular in country, bluegrass, and folk music.

The metal ring around the round body creates a unique twang that makes players stand out from the garden variety ukulele enthusiasts.

Like a full-size Banjo, the Banjolele typically has nylon strings but tunes higher to GCEA. As a result, soprano ukulele players might be most comfortable with the Banjolele.

However, concert or tenor players may find it to be an exciting addition to their repertoire.

It has 15 frets, longer than a soprano but standard for a concert.

The Banjolele achieved peak popularity in the 1920s and ’30s with US artists like Roy Smeck and Wendell Hall.

Since then, its use dwindled, and it became rare to see it played anywhere, let alone hung up in music stores.

Nowadays, though, it’s regaining popularity as a special instrument with a refreshing sound that you can use in a wide variety of music. 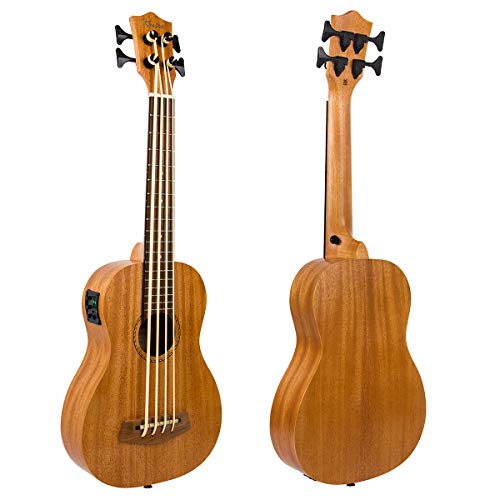 The Bass Ukulele is a cool little instrument increasingly popular as a travel companion for bassists looking to scratch that musical itch.

While around the same size as a baritone ukulele, the bass ukulele features polyurethane strings that can mimic the notes of an upright bass.

Originally developed by Road Toad in 2007, who partnered with Kala in 2009, the bass ukulele or U-Bass was initially dismissed as a gimmick to attract new bass players to the scene.

However, once seasoned players got their hands on the instrument, they quickly realized that the U-Bass was nothing to be joked about.

Since the bass ukulele is new to the scene compared to its counterparts, it’s only recently gained the recognition it deserves.

Today, you would be hard-pressed to find a store or online retailer that didn’t have some sort of portable U-Bass on display.

A dreamlike combination between a harp and a ukulele, the Harp Ukulele has a long neck with fretted strings like that of a tenor or concert ukulele.

However, it also features a bridge extension like a harp, with four or five unfretted strings that you can play upright or laid across your lap like a standard uke.

The exact origins of the harp ukulele are murky at best, but history credits Kris Knutsen with bringing the first one to the United States in 1896.

While it never reached nearly the same level of popularity as other variants like the Banjolele and Guitalele, musicians are now experimenting with them more often.

They are one of the more unique instruments out there, without a doubt.

The difficulty with the harp ukulele is that it’s hard to manufacture top-quality instruments. It’s a fairly intricate piece, especially considering how small it is.

However, with improvements in technology, the harp ukulele might see a spike in use in the coming years. 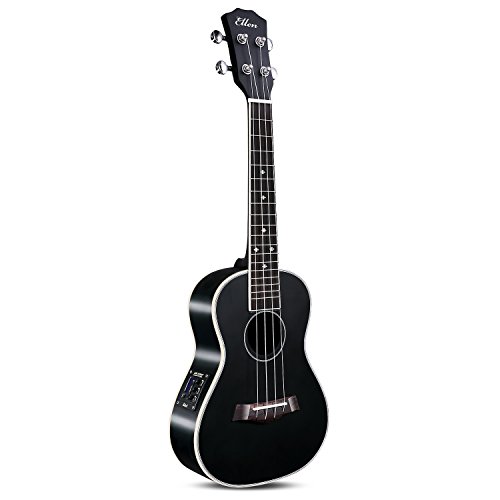 Last but not least, the Electric Ukulele is just the electrified version of standard ukuleles.

You can find electric varieties of soprano, tenor, concert, and baritone ukuleles. You may even find some special electric ukes, like an electric guitalele or bass ukulele.

They’re especially useful if you want to record some music with a ukulele involved, hooking straight into your system.

There are two different electric ukulele types available; the full-electric and the electro-acoustic.

While the full-electric might have some more options in terms of electronic interface, electro-acoustic are more popular by far.

They’re typically cheaper, and you can play them without any sound equipment.

Edmund A. Rafalco patented the first electric uke in 2012, making it the most recent arrival to the ukulele scene.

However, considering most music is made these days electronically, it’s become readily available in most places you might buy instruments.

And there you have it—all the different varieties of ukuleles.

From the standard soprano to the harp ukulele, we hope you’ve gained some insight into the wide variety of options available.

The more you learn about the different types of ukuleles, the more creative and inspired you might become to come up with new music.

Every uke has its use.

If you’re looking for a reliable instrument that you can travel with, there isn’t a better option than a unique ukulele that sounds great no matter where you are.