A Guide To The Different Parts Of A Trumpet

When it comes to talking about the different parts of a musical instrument, every instrument has its own specific technical jargon, and the trumpet is no exception! It can get very confusing it you’re new to the instrument, and it’s easy to get mixed up even if you’ve been playing for a while.

So in this article, we’ll take you through all the parts of the trumpet, explaining all the terms that you’re likely to come across and what their job is.

Anatomy of the Trumpet

There are lots of different types of trumpets, but in this post we’re going to be looking at probably the most common kind: the Bb trumpet.

First up is the Mouthpiece which is the small, removable part of the trumpet that touches the lips.

This is the part that you ‘buzz’ in to make a sound.

Although trumpet mouthpieces come in many different variations of shape and size, they all feature a cup-shaped hollow that connects to a narrower shank, which is inserted into the mouthpiece receiver (which we’ll look at next).

The shape of the mouthpiece will affect the sound and feel of the instrument as a whole.

The main variations are in the diameter of the rim around the cup, the shape and depth of the cup itself, and the width of the opening between the cup and shank (called the throat).

Simply put, the Mouthpiece Receiver is the narrow end of the trumpet into which you place the mouthpiece.

It’s usually slightly thicker than the leadpipe, so that the end of the mouthpiece can fit more snugly into the main body of the instrument.

Next comes the leadpipe (‘lead’ is pronounced to rhyme with ‘read’, not ‘bed’!).

This is the first part of the tubing of the main trumpet.

The material, width and shape of leadpipe can affect the sound and feel of the trumpet considerably, because it is the first part of the instrument which the air goes into.

The leadpipe is also fitted with a small loop of metal (pinky ring), for the little finger of the right hand to rest on.

The Main Tuning Slide is a U-shaped piece of tubing that fits into the leadpipe at one end, and into the tube leading to the third valve at the other.

As the name suggests, the Main Tuning Slide can be used to adjust the general tuning of the instrument by changing the overall length of the tube.

This is done by pulling the slide outward to lower the tuning (also called flattening the pitch), or pushing it in to raise the tuning (sharpening).

It is important to keep the slide well lubricated, so that it is easy to move.

This is done by applying a small amount of slide grease every couple of weeks.

Water Keys are placed in the trumpet to allow the player to release moisture in the breath that condenses and builds up in the instrument.

Most often, they are located on the Main Tuning Slide and Third Valve Slide.

This is because these are the first two bends in the tubing of the trumpet, and therefore places where water is most likely to collect.

The most common type of water key consists of a lever and a spring.

The lever has a piece of cork on the end that covers a small hole in the trumpet.

When you press the lever, it uncovers the hole and allows you to blow the water out.

The spring returns the lever to its original position when you let go, covering the hole again.

What Comes Out of the Water Key?

However, despite this name, it’s not actually spit that’s coming out of the trumpet (at least, not if you’re doing it right!).

In actual fact, the water that builds up is mainly due to the moisture in the air we breathe out.

As the air passes into the trumpet, it condenses into water, in much the same way as the condensation that forms on your bathroom mirror when you have a shower.

The three Valves were the last part to be added to the trumpet, before being a standard part of the instrument by the mid-nineteenth century.

These are the most complex part of the instrument, and need to be kept well maintained.

The Valve Casings are the three cylinders which the valve pistons fit into.

They are designed so that the valves fit completely flush, without any room for air to escape around the sides.

Most trumpets have a type of valve called a Piston Valve.

This is a cylinder that is pushed down to change pitch, with a spring to quickly return it to its ‘up’ position when released.

Most trumpets have three Pistons (sometimes four) that each fit into their own valve casing.

The pistons have a series of holes or ‘ports’ through them to direct the air along different lengths of tube depending on whether the valve is up or down.

When the piston is up, the ports line up to send the air straight through the valve and onto the next part of the trumpet.

When the piston is pressed down, a different set of ports lines up with the air coming in, and sends it along an extra length of tubing, lowering the pitch of the note.

It is important to keep the pistons well lubricated with valve oil, so that they are able to move quickly and without friction.

This helps trumpet players to be able to change notes very rapidly.

Some trumpets have a rotary valve system, which works in a similar way but with a valve that turns when pressed, rather than moving up and down.

The Finger Buttons are the caps at the very top of the valve that are pushed by the fingers of the right hand.

They are designed to be comfortable to press down, and may often have a mother-of-pearl trim, or other design, to add to the visual appeal of the instrument.

The Top Valve Caps screw onto the top of the valve casing.

One of their functions is to keep the valves in the casing, preventing them from escaping when the valve springs up.

The other purpose is to dampen the impact of the finger button on the top of the valve when the valve is pressed down.

This is done with a circle of felt or rubber around the top valve cap.

No prizes for guessing what these do!

The Bottom Valve Caps screw onto the bottom of the valve casing.

Their main job is to stop gunk and oil from dripping out the bottom of the valve and onto the lap of whoever is playing the trumpet.

As such, they get pretty grimy and should be cleaned out fairly often with a paper towel.

Each valve is connected to a Valve Slide, three different lengths of tubing that each lowers the pitch of the trumpet by a different amount when the matching valve is pressed down.

The third valve is numbered last because it’s the furthest away from the player, but it’s actually the first valve that air goes into.

The Third Valve Slide lowers the pitch by three semitones, and is the longest valve slide.

It is most often used in combination with other valves, and because this makes the tuning less reliable, the third valve slide is designed to be easily moved to adjust tuning.

This is done by a ring fitted to the slide, allowing it to be moved by the little or ring finger of the left hand.

To allow easy movement, the third valve should be kept well lubricated with valve oil or light slide oil.

Next comes the Second Valve Slide, which is attached to the middle valve.

It’s the shortest valve slide on the trumpet, lowering the pitch by one semitone.

As it’s so short, it doesn’t need to be moved to improve tuning, so can be lubricated with slide grease to stop build-up of corrosion and allow it to be easily removed for cleaning.

The First Valve Slide is fitted to the valve nearest the player and it lowers the pitch by two semitones.

Many trumpet models will have a U-shaped thumb rest, to allow the left thumb to move the slide outwards to adjust the tuning of some notes.

Like the third valve slide, the first valve slide should be kept well lubricated for easy movement.

Last, but not least, comes the Bell and it’s not hard to see why this part gets its name.

The bell is the length of tubing at the end of the trumpet that gets gradually wider and then flares outwards at the end, like a bell shape.

The material and shape of the bell gives the trumpet its distinctive sound and volume, amplifying and directing the vibrating air in the instrument.

Summing up the Trumpet’s Parts

That’s it for our guided tour of the parts of a trumpet, we hope it helps make sense of it all.

You should now be able to recognise and talk about all the main parts of the instrument. 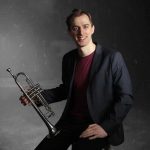