A Guide To The Different Parts Of A Cello: Anatomy Explained

The cello is both large and heavy, as well as delicate and attractive, with a curvy hourglass shape, patterned wood grain, and decorative features such as a carved scroll.

The large size and decorative features can make the cello seem quite awkward to handle at first, but once the parts are broken down, it becomes easier to handle safely and to understand how it works.

In this post, we’ll go through and name the different parts of the cello, and explain what they do and why they are there.

Anatomy of a Cello

Although the cello has lots of parts, we can break it down into just 3 main parts:

But, we’ll take a look at all the other parts too and describe what they do and why they’re there.

As the name suggests, the Pegbox is a hollowed out section of wood above the neck and below the scroll which contains holes which the pegs fit into.

It is usually made of maple and often the same piece of wood is used to make the scroll and neck.

The Scroll is the top most part of a cello and is found above the pegbox.

Usually, they’re carved from maple wood to look like a paper or parchment scroll, but cello makers (luthiers) occasionally make them in the shape of a human or animal head.

The scroll serves no purpose other than decorative and so doesn’t affect the sound of the cello.

The Tuning Pegs are lollipop shaped and wooden, with a flatter rounded end and tapering shafts, which fit into holes in the pegbox.

Pegs are usually made of ebony which is the same hard, dark wood that the fingerboard is made of.

One end of the strings is secured to the shafts of the pegs by being threaded through small holes, wound around the shaft and tightened by turning the pegs.

As the strings are tightened, the sound (or pitch of the note) becomes higher (sharper), and as they are loosened it becomes lower (flatter).

Changing the pitch this way is called tuning.

A bit like the neck of an animal, the Neck of a cello is the long thin piece of wood that connects the pegbox to the body of the violin.

It is usually made of maple from the same piece of wood as the scroll and pegbox.

The Nut on a cello, or in fact all other string instruments, is a raised strip of wood at the top of the fingerboard.

The strings rest on this, lifting them away from the fingerboard so that they can vibrate freely to make sound.

It has small grooves cut into it so that it can hold the strings in place preventing them from moving around or slipping off the fingerboard.

The nut also affects the instrument’s action, which is how we describe how far away from the fingerboard the strings are.

The Fingerboard is the long black curved strip of wood (usually ebony) which is on top of the neck, and extends over the body of the cello by itself.

The cellist will use their left hand fingers to press down on this to make different notes, hence the name, fingerboard.

Pressing down shortens the length of string vibrating, making faster vibrations and thus a higher note, so as fingers near the bridge, the pitch gets higher.

The fingerboard adds neck strength and supports string tension, so ebony is usually chosen for hardness and durability, but sometimes stained woods are used.

There are 4 strings on the cello, tuned to the notes A, D, G and C (“All Dinosaurs Go Crazy”), with A being the highest in pitch.

Although called ‘strings’, they are not made from string, but metal, gut or metal-covered gut.

Although not as common today, the term ‘gut strings’ was literally strings made from guts as string instruments in the baroque and renaissance period would make their strings from animal intestines.

Strings can be plucked (pizzicato) or played by pulling and pushing a bow across them (bowing).

At the very end of the neck you’ll find the Button which is a semicircular shaped part that joins the neck and body of the cello together.

The function of the button is to provide a greater gluing area when the neck joint is attached to the cello.

The cello’s Body is a wooden sound box forming the largest part of the cello and enables the vibration of the strings to resonate and produce a more full, louder sound.

You can feel these vibrations if you touch any part of the body when the cello is played.

The body is made of three parts,

The Top is the large piece of wood, typically spruce, on the front of the cello with “f” holes in it.

It is the soundboard where the sound is developed and increased.

It transfers string vibrations coming through the bridge to the ribs and back via the sound post.

The Back is the large wooden part with no holes in it and connected to the top by the ribs (sides).

It may be a single piece of wood or have two matched sections and is generally flamed or striped maple but sometimes you’ll see cellos use other woods like poplar or willow.

The top and the back are connected by the Ribs or sides which are the pieces of wood that go around the entire sides of the cello.

They run all the way around the cello, and this creates a large resonant sound box, giving the cello its trademark tone.

Ribs are usually made of flamed (striped) maple to match the back.

Bouts is the name used to refer to the wider rounded parts of the cello’s body, above and below the waist.

There is an upper bout, closer to the neck, and a lower bout near the endpin.

This is there to allow the cellist to bow without hitting the body of the cello.

The F holes on a cello are, as their names suggests, the holes in the top of the cello that are shaped like letter Fs.

They help the instrument to resonate more and allow the vibrating air to escape the cello.

As the name suggests, the Bridge is a small arched piece of maple (normally flecked or spotty), which lifts the strings up away from the fingerboard, allowing sound vibrations to travel through it to the body of the cello.

It is decoratively carved, usually with a heart shaped hole and swirls, and is not glued in place but held by string tension.

Along with the nut, the bridge’s height affects the action of the strings.

The fine tuners are the metal screws fixed to the base of the strings on the tailpiece.

They use a lever to make string tuning easier than by turning the pegs and allow for more minute and precise tuning adjustments.

Not all cellos have them, as they are only suitable on metal strings and can affect sound quality although you also find them on violins and violas.

The Tailpiece is a narrowing curved piece of wood, usually ebony, that is where the strings are anchored at the opposite end to the pegbox.

They have four round holes in it for securing the end of the strings and pulling them towards the saddle and endpin.

Its primary job is to ensure the strings are taut, but they can also affect the sound of your cello by making it more resonant.

The Tail Gut is the piece that connects the tailpiece to the endpin (spike) collar, and enables the strings to be pulled tight.

These are made from strips of metal or synthetic materials in modern instruments although traditionally, like the strings, they were made from animal intestines.

The tail gut is mounted on the Saddle, which lifts it away from the body of the cello as it travels towards the endpin (spike) collar which we’ll look at next.

The Endpin Rod, or Spike, is a long metal rod positioned at the base of the cello’s body, holding the cello in place while being played.

The endpin is secured with a thumb screw which is tightened or loosened to increase its length.

After loosening the screw, a cellist will pull the endpin out to the right height, then tighten the screw.

This raises the cello to a comfortable height for playing.

Normally made of steel or wood, this may have a rubber tip or a sharp point, which can pierce the floor to provide grip.

Some endpins are removable but on most instruments the endpin should always be put back inside the cello after use and secured safely.

The Endpin Collar is a rounded piece of wood at the base of the cello which holds the endpin in place.

It is mounted in a hole into the cello, so that the endpin can be stored inside the cello when not in use.

The Sound Post is a narrow cylindrical piece of wood, usually spruce, which is wedged in place inside the cello between the top and back.

It is positioned inside just below the A string side of the bridge.

It carries sound vibrations from the top through to the back of the cello, giving a full rounded tone.

You should always be very careful when changing strings not to take them all off at the same time as the sound post is held up by the tension.

If it falls down you’ll need to visit a luthier to get it put back up so be extra careful!

The Bass Bar is a strip of wood (usually spruce) which is positioned inside the cello, running almost all along the length of the top, to add strength and carry sound.

It is not visible, but it sits under the bridge near the C string enhancing sound waves for a richer quality on deep notes.

The lovely word Purfling is the name given to describe the decorative edge all around the top and back of the cello.

Two or three wooden strips are inlaid into the wood of the top and back, helping to protect it from cracks.

Often a light strip is between two darker strips, but sometimes the edging is painted on instead.

Summing Up The Cello’s Parts

That’s it for our post on the names, definitions and function of the different cello parts.

We hope it helped explain it all for you.

There are many parts, but the cello is essentially very simple – strings stretched over a wooden body and neck and tightened by pegs.

However the structure of a cello is complex (hence all the part names) because it has to create the famous rich, deep and mellow sound.

This is the result of every part working together, balancing perfect string tension, with the freedom for sound vibrations to resonate throughout the wooden body.

So cellos are delicate instruments, needing careful handling and storage, but they always have the potential to reward the user with a beautiful sound. 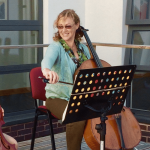 Written by Christine Davies
Christine Davies is a widely experienced teacher, and her passion is playing the cello. Her drive to make music learning fun led to the publication of her book, ‘Games for Music Reading.’ Recently she formed the cello quartet Montycelli which she takes into local schools to expose children to live music and inspire them to learn the cello.