The records of talented female violinists date back to the 1700s, from Mozart’s forgotten prodigy sister, Nannerl, to the first performing female violinist, Gertrud Schmeling. Despite only a few making it into known history, the past few decades brought us women who have been increasingly dominating the music industry.

Paving the way for future female musicians, the violinists of the past few generations not only broke records but also stigmas against female artists. In this post, we’re going to look at the lives and careers of 20 famous female violin players that every budding violinist should know.

Up first, Hilary Hahn is regarded as one of the greatest violinists of her generation. She’s best known for playing both classical and contemporary compositions.

She described her preferences as honoring “the traditional violin literature while delving into the unexpected.”

She was accepted at the Curtis Institute of Music in Philadelphia at the age of ten.

During her studies, she learned chamber music, specifically the piano, with Felix Galimir and Gary Graffman.

Born to an Italian father and an Italian-Scottish mother, Nicola Benedetti grew up in North Ayrshire, Scotland and by all accounts was a child prodigy on the violin.

At the age of four, she was playing the violin and then led the National Children’s Orchestra of Great Britain four years later at the young age of 8.

By the age of 15, Nicola would have performed in many prestigious orchestras, landing her place as a master performer.

She has played the Gariel Stradivarius violin since 2012.

Born in the Netherlands in 1978, Janine Jansen is a renowned Dutch classical violinist.

She came from a musical family with her father being Utrecht’s St. Martin’s Cathedral organist, her mother a singer, her brother a cellist, and her uncle the famous bass singer, Peter Kooy.

Under such a musical upbringing, Jansen began playing the violin at the age of six.

Japanese-born Midori Gotō is another famous female classical violinist and was also a child prodigy.

Midori was born in Osaka, Japan. Incidentally, it would be her native city that would be the first to witness her earliest performance at the age of six.

Five years later, at the young age of 11, she made her debut in 1982 with the New York Philharmonic. It was this appearance that made her career take off.

Midori is often praised for her intelligence and her versatile understanding of the material.

Fischer is not only a celebrated classical violinist, but she’s also a pianist and a chamber musician.

She was born in Munich, Germany, to a musically-inclined mother, Viera Fischer, who gifted Julia her first violin at the age of three. That was also when she started teaching her piano.

When she was only nine years old, she was taught under the renowned violin professor Ana Chumachenco. It’s often claimed that she later became her successor.

She’s currently a professor at the Munich University of Music and Performing Arts.

Born to an American working-class family, Lindsey Stirling used to get only half violin lessons due to her family’s lack of money.

By the age of 16, she joined her first rock band and would write, dance, and perform with them.

Stirling plays a variety of genres, from classical to rock to electronic dance music. Her performances are unconventional and often feature choreographed dances.

Stirling is also one of the very few violinists who started out as a YouTuber.

Renowned violinist and actress, Lucia Micarelli was born in New York to a Korean mother and an Italian father.

At the age of three, Lucia Micarelli was playing the violin, and by the age of six, she made her debut in the Honolulu Symphony Orchestra.

Micarelli proved to be a very skilled performer; by the age of 19, she toured with notable musicians like Josh Groban and Jethro Tull. She also toured with the Trans-Siberian Orchestra.

Next, we have Anne-Sophie Mutter who is a distinguished German classical violinist.

She performed her first concert at 13 years old in 1976 at the international Lucerne Festival in Switzerland.

Despite being a classical musician, she was known to champion contemporary music and had many composers create works made especially for her.

Mutter was awarded two Grammys and a Sonning Award.

Born to South Korean immigrants, Sarah Chang was recognized as a child prodigy from a very young age.

Her mother, a composer, and her father, a violinist and a music teacher, taught Chang how to play as a toddler. When she was only five years old, she was accepted at Juilliard School.

At the mere age of six, she performed her first two concerts with the Montreal Symphony and the prestigious New York Philharmonic Orchestra. As a teenager, she was a celebrated soloist.

Batiashvili is a classical violinist hailing from Georgia. Born to a violinist father and a pianist mother, she was taught the violin at the age of four by her father.

When she was 12, her family left Georgia for Germany. There, she, like Julia Fischer, studied with Ana Chumachenco.

Her style has been described as soft and graceful, emitting “natural elegance, silky sound and the meticulous grace of her articulation.”

She’s also a chamber musician and plays one of the most expensive violins in the world, a Joseph Guarneri “del Gesu” from 1739.

Born in Chicago, Rachel Barton Pine started learning the violin at the age of three. At the age of seven, she performed her first concert with the Chicago string Ensemble.

Her performances are described as intimate and passionate. Pine takes pride in being in touch with the creation process, writing her own liner notes and composing some of her performances.

She’s most celebrated for her versatile compositions, mastering the classical genre along with Baroque and Heavy Metal.

At 10, her career took off when she made her debut with the Philharmonia Orchestra.

Vanessa-Mae traveled all around the world to perfect her craft; from London to Beijing, to touring with the legendary Michael Jackson.

Born in Hamar, Norway, Mari Samuelsen is an acclaimed virtuoso violinist. She was introduced to the violin when she was three, a toddler.

She grew up in the countryside playing music with her brother and sister, who is a distinguished cellist.

She became a student of famous Norwegian violinist Arve Tellefsen when she was four years old and remained his student for almost a decade.

Despite having played predominantly classical compositions, Samuelsen has claimed that “genre has never been important to me.”

Anastasiya Petryshak is a Ukrainian classically-trained violinist and soloist. At five years old she was introduced to the piano and, years later, the violin.

She is a seasoned performer, having her first solo performance at the early age of eight. She later continued her studies in Italy, enrolling in the Accademia Musicale Chigiana.

Young and ambitious, Petryshak is always eager to improve her craft. She has been training with Professor Rudolf Koelman since 2017.

She grew up in a Soviet Russia where she had little contact with modern music produced at the time. That was until she defected in 1983.

Her creative interpretation of pop and jazz compositions propelled her name to an international scale as a virtuosic violist and innovative performer.

She’s often praised for her performances and recordings of a number of violin concerti and J.S. Bach’s compositions.

Born in Poland to a struggling violinist, Ida Haendel was recognized as a child prodigy since she was a toddler.

She started picking up the violin when she was only three and a half years old.  Later she would claim: “I don’t know how I play the violin… I just pick up the violin and I play it.”

She started performing at five years old and continued to do so for almost seven decades.

During WWII she performed for the American and British troops, later taking up posts as a teacher.

Born in New York City to a family of musicians and singers, Karen Briggs learned to play a composition by ear as a child.

She started taking lessons when she was 12, and at 15, she decided to become a jazz violinist. Her path was unconventional and her first performance was at a wedding.

She attended Norfolk State College and later played in the Virginia Symphony Orchestra, where she continued to play for four years.

Throughout her career, she performed with many popular artists.

Steinbacher is a German classical violinist. Her mother introduced her to the violin at only three years old.

She later attended Munich College of Music at the age of nine. There, like many greats, she was mentored by Ana Chumachenco.

She is often called “queen of the evening” for her elegant performances and has played with many world-class orchestras.

Her technique was described as “finely polished” and her playing as having “a beautifully varied palette of timbres.”

Born in Paris to a musical family, Ginette Neveu was taught the violin by her mother.

Her first performance was a solo at the age of seven. She was considered a child prodigy, coming first at the Henryk Wieniawski Violin Competition.

After World War II, she toured Europe with her brother, who is an acclaimed pianist. Her presence was often praised as dark and captivating. Sadly, her life was cut short when an airplane she was in crashed.

Kyung-Wha Chung was born in Seoul to a large family. She began playing the piano at four, however seemed to be more attentive to the violin and started playing it at seven.

She made her first debut at the age of nine with the Seoul Philharmonic Orchestra. In 1961, she attended Julliard in New York.

Her career took off when she became a substitute for Itzhak Perlman with the London Symphony Orchestra, which landed her other performances and a record deal.

She later became an educator at Julliard where she’s been for over four decades.

That about wraps up our list of famous female violinists, we hope you’ve enjoyed learning about their careers and listening to some of their performances.

If there are any that we’ve missed, let us know and we’ll be sure to update this list! 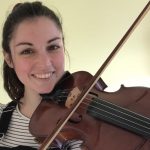