The bassoon is a woodwind instrument that often gets overlooked as a solo instrument. It’s one of the most difficult instruments to play with its complex fingerings and is notoriously hard to find a balance between being in tune and having an expressive sound.

In this article, we’ll explore some famous bassoon players from all over the world who have made their mark on the history of the bassoon.

Born on June 2, 1857, Edward Elgar is arguably one of England’s most quintessentially English composers.

Today he’s best known for his compositions Enigma Variations and Pomp and Circumstance.

However, between 1878–82 as a young man, Elgar was a member of a musical quintet, where he played the bassoon.

It might be why he wrote Romance for Bassoon which is an unusual piece, especially in the decision to highlight the bassoon.

After years of struggling for and later finding notoriety in the English music scene, Elgar died on February 23, 1934.

Julie Price is a famous bassoon player best known to music lovers for her work with chamber music and solo playing.

Born in Britain in 1963, Price’s first choice of instrument was the oboe but her then-teacher needed a bassoon player, so that’s what Price played, and the rest is history.

Price studied at the University of Manchester and then at the Royal Northern College of Music.

Price then went on to Geneva, where she trained with Roger Birnstingl.

Price’s career has seen her play with many orchestras, quartets, and orchestral groups, including the English Chamber Orchestra and the Royal Opera House in Covent Garden.

Currently, Price works with the BBC Symphony Orchestra and as a visiting professor of bassoon for the Royal College of Music.

Born in Germany in 1937, Klaus Thennemann didn’t start playing the bassoon until he was 18.

But the late start didn’t stop this famous bassoonist from making an impression as only aix years later, he joined the Northwest German Radio Symphony Orchestra, and a year later, became its principal bassoon player.

Thunemann played with this symphony orchestra for the next 16 years before taking up teaching the bassoon while he continued to play the bassoon as a soloist.

He retired from teaching in 2005 and received an Order of Merit of the Federal Merit of Germany in acknowledgment of his skill and accomplishment as a bassoon player.

Born in 1958, Judith LeClair studied bassoon at the Eastman School of Music in New York.

She made her musical debut aged 15, playing Mozart’s Sinfonia concertante with the Philadelphia Orchestra.

LeClair joined the New York Philharmonic in 1981 where she still plays to this day.

It premiered in April 1985 while the New York Philharmonic celebrated its 150th anniversary.

When it comes to famous bassoon players, it’s hard to outmaneuver Sir Mark Elder for notoriety.

Elder was born in June 1947 and his musical career began when he joined the Canterbury Cathedral choir as a boy.

But he struggled with the change from boy chorister to mature singer, so he began playing the bassoon.

Unable to envisage a career playing only bassoon, Elder took up conducting as an undergraduate.

He learned quickly, and his career stretched from England to the Sydney Opera House.

He has received numerous accolades for his outstanding work in the performing arts.

Illinois Jacquet was born to a musical family in October 1922.

He stands out musically as a rare jazz artist that moved from playing the saxophone to the bassoon.

Jacquet made the switch in the sixties, after a long career playing alongside jazz greats like Count Basie and Lionel Hampton.

He continued producing hits with the best, and his bassoon playing took off with a version of Thelonious Monk’s Round Midnight.

In 1983, Jacquet started a band of his own, and his range of musical expression guaranteed him and his bassoon access to many musical concerts around the world.

Jacquet died in 2004, leaving behind a legacy of honking, screeching musicality that continues to impact blues and jazz musicians today. 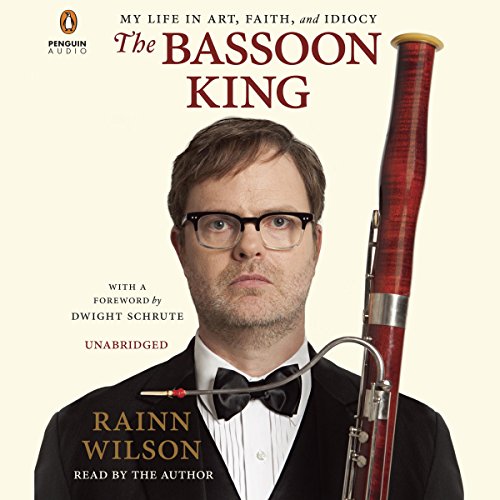 Rainn Wilson isn’t an obviously famous bassoon player as he’s better known by most for his turn as Dwight Schrute on NBC’s The Office. But he also plays bassoon!

Wilson started playing bassoon in seventh grade and he says he aspired to the saxophone, but it was a popular instrument, and he made do with the bassoon instead.

Professionally, Wilson went on to act, but he picked up bassoon playing again to promote his book, The Bassoon King, in 2015.

To the horror of bassoonists everywhere, Wilson’s televised promotion ended when he smashed the bassoon in frustration.

Born in Uruguay in 1965, this famous bassoon player started playing young taking his first bassoon lessons from his father, and at 16, went to study bassoon under Kerrison Camden at the Royal College of Music.

He later studied in Hanover with Klaus Thunemann.

Regarded as one of the foremost bassoonists of his generation, Nunez now plays principal bassoon for the Concertgebouworkest.

He also gives masterclasses in bassoon playing and technique.

Since 1999, Nunez has held a professorial chair at the Robert-Schumann-Hochschule in Dusseldorf.

Bill Conti is best known for his musical theme composed for the film Rocky, however, he is also a famous bassoon player in his own right.

Born in 1942, Bill Conti was so proficient as a bassoon player that he received a musical scholarship for his playing.

Famously, he said he had a choice between playing piano and being out-performed by more competent artists or sitting for the bassoon scholarship.

Conti took the bassoon scholarship, and for the rest of his university career, played the bassoon in Louisiana State University’s symphony orchestra as first chair.

After a varied musical career at university, Conti went on to study music at Julliard in New York and continues to write compelling thematic music for movies and cinema.

Born in 1936 in Aberdeen, Martin Gatt studied bassoon with Archie Camden at the Royal College of Music, in London and from 1958-66 played with the London Philharmonic Orchestra as its principal bassoonist.

In addition to playing bassoon, Gatt taught music at the Guildhall School of Music between 1967–84.

He also created and introduced the Department of Wind, Brass, and Percussion while teaching in Hong Kong.

When not playing or teaching, Gatt adjudicates competitions and offers masterclasses in bassoon technique and improvisation.

Rachel Gough is a classically trained bassoonist who began her studies through Aldeburgh Music and played with the European Youth Orchestra.

Her playing is immediately recognizable to mystery devotees who will have heard her on Inspector Morse.

She is also featured on the BBC-produced Pride and Prejudice.

Gough also gives masterclasses and worked as a teacher through the LSO Centre for Orchestra and the Royal College of Music.

Paul Hanson is another jazz-playing bassoonist whose career started on the saxophone.

Hanson has played with some huge names such as Béla Fleck and the Flecktones, Billy Cobham, Wayne Shorter, David Binney, Medeski Martin & Wood, and even Ray Charles.

In 2008, Hanson worked with Cirque du Soleil’s ZED show to create the role of an electronic improvising bassoonist. The role was part of a performance at Tokyo’s Disney Resort and ran with various bassoonists from 2008–11.

In addition to playing, Hanson offers masterclasses in bassoon technique and improvisation.

Born in New York in 1932, Weisberg began his musical studies at the High School of Music before pursuing further study at Julliard.

Following graduation, Weisberg played variously with the Houston and Baltimore symphonies as first bassoon and then with Cleveland as second bassoon chair.

For 14 years, Weisberg played bassoon with the New York Woodwind Quintet before returning to Julliard to teach.

He also taught at the Tate University of New York, Stoney Brook University, and Yale.

Born in 1795, François Devienne is primarily associated with his career playing and teaching flute however, he was also a bassoonist and wrote five compositions for the bassoon.

He started his musical career as a choirboy going on to study flute with Felix Rault but later played the bassoon for the Paris Opera.

Devienne died in 1803 and left behind over 300 compositions for various instruments.

One of these pieces was Méthode de Flûte Théorique et Pratique, which critics credit with improving the level of music written for woodwinds.

Born in Vienna, Austria in 1939, classical bassoon player and conductor, Milan Turkovic is one of the world’s most famous bassoon players.

His international acclaim as a bassoon soloist has sent Turkovic all over the world to play.

His career includes experiences with the Vienna Symphony Orchestra, the Stockholm Philharmonic, and Bamberg Symphony, among others.

Turkovic is also an acclaimed conductor, and in 2018 led a performance of Twelve Angry Men for Cello featuring cellists from Lincoln Centre, the Metropolitan Opera, the New York Philharmonic, Julliard, and the CMS.

Summing up our List of the Greatest Bassoon Players

We hope you’ve enjoyed learning more about the bassoon and some of its most famous players.

From composers and educators to t.v stars and jazz musicians, the bassoon is definitely underrated and doesn’t get the credit it deserves.

We’ll be adding to this list so let us know who we’ve missed and we’ll include them.