The ukulele is a cheerful instrument that adds an exotic and adventurous air to any melody. Its Hawaiian origins, perky tunes, and close association to Elvis Presley’s mellow songs certainly contributed to that vibe.

This smallish instrument that looks a lot like a guitar, as you might expect, belongs to the lute family. It contains four strings only that are typically plucked in quick patterns to get a lively wholesome melody.

If you’d like to know more about this instrument, here are 14 interesting facts about the ukulele you might now know.

1. The Real Inventor of the Ukulele Remains Unknown

The ukulele found great fame and popularity in Hawaii around the late years of the eighteenth century.

However, although the Ukulele is well and truly considered a Hawaiian musical instrument, most historic accounts agree that it wasn’t invented there.

The actual roots of the ukulele are attributed to Portuguese immigrants who traveled to Hawaii in droves in search of better living conditions.

At the time, the sugar cane plantations and sugar-dependent industries were flourishing in Hawaii. While in Portugal, the economy was folding.

It’s believed that a bunch of Portuguese workers brought that instrument to Hawaii.

Three, in particular, were hugely talented in playing the ukulele, which was called the machete or braguinha in their culture.

2. Ukulele Translates as The ‘Jumping Flea’

On the 23rd of August of 1879, Joao Fernandes sailed from his hometown, the port city of Funchal in Madeira, all the way to Honolulu.

As soon as he set foot in the harbor, Fernandes took out his braguina and started playing and singing gleefully.

The Hawaiians who were there loved the show, the new instrument, and the song.

They also thought that Fernandes’ hands moved so swiftly on the fretboard like a ‘ukulele’ which in Hawaiian, means jumping flea!

3. A Royal Reception for the Ukulele

Like many Hawaiians, King David Kalakauna liked the music of the ukulele and the songs that accompanied it.

In a short while, he became quite fond of these tunes, and a ukulele performance became a staple in all royal gatherings.

The enthusiastic royal backing of the ukulele helped in making it a part of the Hawaiian tradition and increasing its popularity.

Famous ukulele player George Harrison, who was nicknamed the quiet Beatle, was in fact quite jolly and fun-loving.

He was an adventurous soul who liked experiencing novel tastes in life, but especially in music.

A trip to Hawaii, in addition to the shows of George Formby, was enough to make him fall in love with the ukulele.

George Harrison’s solos quite often included playing the ukulele, and he barely put it down.

His obsession with the tiny instrument peaked around the 1980s, and over the years, he had amassed a stunning collection of ukuleles.

The first man to take a stroll on the moon, Neil Armstrong, had a special admiration for the ukulele that few people knew about.

However, as soon as he returned from his interstellar trip, the whole world became privy to his little hobby.

That’s because during his quarantine after the Apollo 11 expedition, an iconic photograph of him and his colleague came out.

In that photo, he was deeply immersed in playing the ukulele.

6. From Vintage Wood to Commercial Plastic 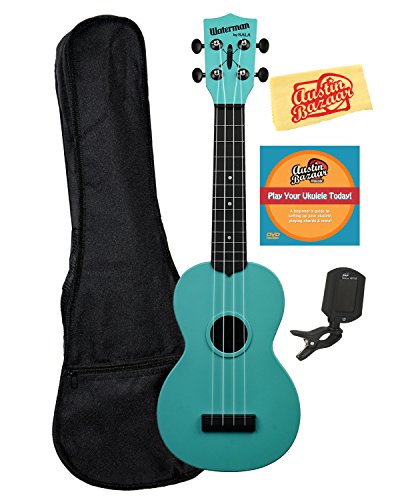 The ukulele gained worldwide popularity as a versatile and easy-to-learn instrument.

But its price remained prohibitive to beginners.

That’s why the manufacturers, like Mario Maccaferri, resorted to producing plastic models sold at economic costs.

They actually rolled out around 9 million ukuleles in the 1940s.

The best and finest ukulele’s though are still the wooden varieties.

Harmony, Regal, and Martin are some of the prominent manufacturers of the ukulele in its latest form.

They also made some variations that fused the ukulele with other instruments, like the banjolele and the tiple.

7. It’s a Good Instrument for Beginners

The ukulele has only four strings and a generous fretboard. It’s compact-sized, so it’s easy to carry around.

And there are many moderately-priced brands in the market, so buying one hardly makes a dent in the budget.

All these reasons make the ukulele one of the most popular choices for beginners.

Musicians also observed that starting off with the ukulele is less overwhelming for someone who’s just starting out.

Additionally, it makes learning the guitar or even the violin later on much easier as you’re used to playing chords and strumming.

8. The Ukulele Was Featured In Elvis Presley’s Biggest Movie

The King’s warm voice merged beautifully with the soft tunes of the ukulele.

It wasn’t a big surprise then that he played the iconic song Ku-u-i-po on a ukulele in his movie Blue Hawaii.

Elvis Presley wasn’t the only superstar who plucked the joyful chords of a ukulele.

There are many movies where a song necessitates the use of that cute little instrument.

9. The Ukulele Found Its Way Into Japanese Music

Many folks who visit Japan are taken by the popularity of the ukulele at all levels.

Some go so far as to describe Japan as “the second home of ukulele”.

The story begins back in 1885 in Hawaii when Japanese immigrants started arriving in droves.

It was a time of booming economy in Hawaii and floundering businesses elsewhere.

That was also the time when the Portuguese arrived with their small musical instruments.

The Japanese immigrants had some difficulty in communicating with others, and it seems that the music of the ukulele was a better means of bonding.

They took it back to Japan, and by 1920, it was quite popular among amateurs and pro performers alike becoming a very popular instrument in Japan.

10. A Ukulele Song Breaks the Records

Few songs reach the Billboard Hot 100 chart, and it’s a rare occurrence for a song to stay there for 76 weeks.

That was the best seller “I’m Yours” by Jason Mraz, and that amazing story happened back in 2008.

It’s worth mentioning that that big hit started a new wave of popularity for the ukulele.

11. There are Many Different Types of Ukulele

The current form of the ukulele is based on four Portuguese instruments that the immigrants to Hawaii brought along with them.

The Portuguese folklore instruments that inspired the ukulele were the machete, timple, cavaquinho, and rajão.

The mixed origins and constant development of this instrument naturally took it in different directions with each one having different sizes, tuning, and ranges that depended largely on the types of songs and music played in different places.

As a result, there are lots of different types of ukuleles like the Soprano, Concert, Tenor, Baritone, Bass Ukulele as well as the Banjolele and Guitalele!

12. Ukuleles Have Four Strings Only

The ukulele is often compared to the guitar, and some believe that the only difference between them is in size.

However, there’s a much more fundamental point which is the number of strings.

Guitars come with 6 strings while ukuleles have only four. This makes learning, playing, and tuning the ukulele a breeze.

The standard ukulele is often tuned as G4–C4–E4–A4 but this naturally changes with the bigger sizes as they’re tuned differently.

13. Comedians and Entertainers Favor the Ukulele

The ukulele tunes and songs can be so naive, lighthearted, and carefree to the point of being silly!

This instrument sounds like fun, so it’s not too surprising that a lot of comedians and entertainers used it to create the right mood.

Cliff Edwards, Tiny Tim, and Bette Midler are among the stars who took a ukulele along wherever they performed.

14. Marylin Monroe Once Played the Ukulele

In 1959, the epic movie “Some Like it Hot” came out, starring Marylin Monroe, Tony Curtis, and Jack Lemon.

The movie was a romantic comedy, and it was all about the world of female music bands.

In the movie, Monroe plays the role of singer, dancer, and ukulele player!

Summing up our Ukulele Facts

The ukulele is among a few instruments that sing for happiness exclusively and it’s almost incapable of playing sad tunes.

It might be up to a little bit of nostalgia though, to a memorable time, a lovely place, or an unforgettable person.

The Hawaiian and Portuguese origins of that tiny little instrument and the way it brought together people from all around the globe are probably to thank for that upbeat vibe.

We hope you’ve enjoyed learning more ukulele facts and if you have any of your own let us know!