Despite having a simple exterior, the harmonica is one of the most identifiable instruments of our time. The harmonica is a free-reed instrument that uses air pressure to generate sound. It creates an area of low pressure over one side of the reed and bends it to the side. The frame prevents the airflow from going through the other side and increases the pressure returning the reed to its previous position.

In this post, we’ll be discussing 15 interesting facts about the harmonica learning more about its history.

1. The Harmonica Originally had a Different Name

This harmonica had 21 blow holes. But, he originally gave it a different name.

The musical instrument was originally called “Mundaeoline” or “Aura.”

In later years, Buschmann’s Mundaeoline was modified by Joseph Richterto what we now know as the Harmonica.

2. The Harmonica is One of the Most Popular Instruments World-Wide

Harmonicas are the best-selling instruments in the world, with the guitar coming in as a close second.

In the United States of America, approximately 3 million harmonicas were sold in 2019.

This makes up almost one-fifth of worldwide sales which makes the U.S. the country where the highest number of harmonicas are sold.

3. The Harmonica has Many New Nicknames

Most people are completely unfamiliar with the harmonica’s alternative names.

When thinking of a harp, the first thing that comes to mind is the stringed instrument. So, why did the harmonica garner this name?

The most likely reason is the mechanism. The harmonica’s mechanism is extremely similar to that of a Jew’s harp.

This instrument consists of a single reed mounted on a simple frame.

The reed is plucked to create a note which echoes in the player’s mouth.

4. Many Historical Figures Played the Harmonica

There are many important historical figures that were harmonica players.

There are even some U.S. presidents that have some impressive harmonica skills.

Jimmy Carter actually went on stage with Willie Nelson and B.B. King at a concert to show off his skills on the harmonica.

5. Many Mainstream Musicians Played the Harmonica

There are many famous harmonica players who surprised their fans with their harmonica skills.

Some of these musicians include Alanis Morissette, who features the harmonica in many of her songs like “Hand In My Pocket.”

A popular harmonica solo is featured in Bruce Springsteen’s song The River. Springsteen was known to use Hohner Marine Band harmonicas.

Shakira has stunned fans many times by showing her harmonica skills on stage.

6. The Most Recognisable Harmonica is Diatonic 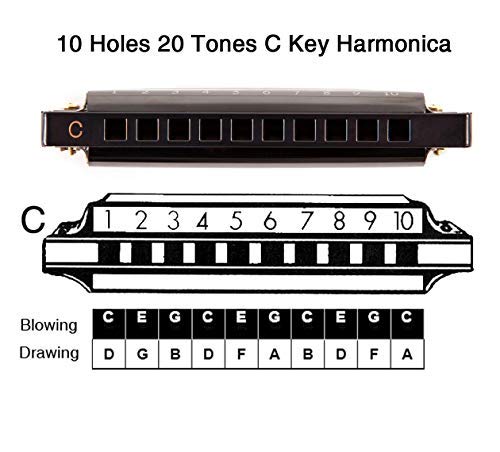 Despite the many different types of harmonicas that are available on the market, the diatonic harmonica is the most well-known.

This is often the type that you see in the movies.

Diatonic harmonicas can only be played in a single key which means you have to buy a completely different harmonica to be able to play in another key.

7. Not All Harmonicas Have the Same Number of Holes 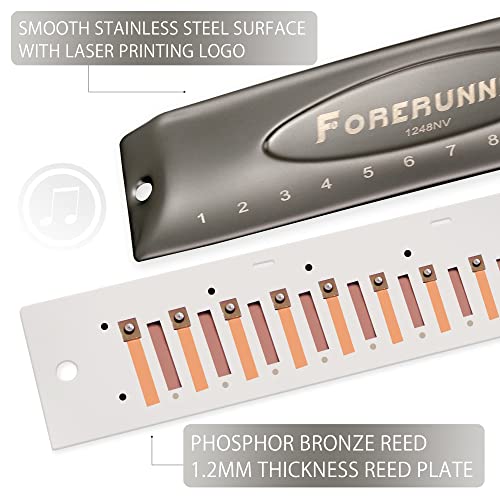 You can identify the type of harmonica by the number of holes it has.

Since this harmonica can play notes in any key it overcomes the challenges musicians faced with the diatonic harmonica.

The tremolo – which is much larger than the previous harmonicas- has 24 holes!

It is possible to find harmonicas that are even smaller than the ones mentioned above. Some harmonicas have been made small enough to fit on a keychain.

Currently, the smallest harmonica is the Hohner Little Lady which has only 4 holes and 8 reeds.

8. The Harmonica was One of the First Instruments to be Played in Space

The first instruments to be flown into the were a harmonica and bell.

In 1965, onboard the Gemini 6 astronauts Walter Schirra and Tom Stafford put on a Christmas eve show.

They used the harmonica and bell to perform Jingle Bells.

Since then many instruments have been flown into space, including the Bagpipes, Guitar, Didgeridoo, Flute and the Saxophone.

The list of instruments used in space remains quite short, making the Christmas Eve harmonica performance even more special.

9. Wooden Harmonicas Have Become Quite Rare

When they were first introduced to the market most harmonicas were made of wood.

Currently, most harmonicas are made using injection-molded plastic, metal alloys, lucite, or silver.

You can still purchase an all wood harmonica, however, these are considered specialized instruments and tend to be extremely expensive.

10. The Leading Harmonica Production Company was Founded by a Clock Maker

He noticed that harmonicas were quickly gaining popularity. So, he decided to convert his clock business into a harmonica factory.

Hohner is currently the world’s leading manufacturer of harmonicas.

When they first started, Hohner only had one worker and could only produce 600 harmonicas a year.

Now the company produces millions of harmonicas a year.

11. The Bullet is a Special Microphone Used to Enhance the Sound of Harmonicas 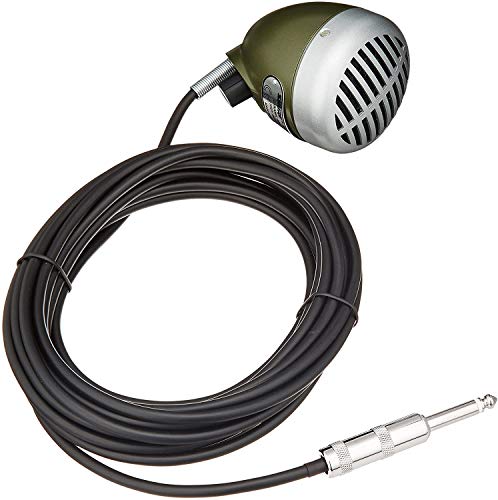 In the 1950s, Little Walter, a blues musician, introduced the use of a special microphone known as a bullet, which allowed him to play his instrument directly into it.

This technique was very useful for musicians since it provided them with a very clear and powerful sound.

This meant that the harmonica could now be heard alongside louder instruments like the electric guitar.

In November 2009, over 6,000 individuals joined the Guinness World Record attempt for the largest harmonica ensemble.

They played for seven minutes together with a string-instrument orchestra.

The event was called Symphony Under The Stars and it was attended by 15,000 people.

13. The ‘60s Were a Turning Point for Harmonicas

During the 60s, the rise of the harmonica was astonishing, as it was able to leap from the blues to other genres.

Various prominent individuals have been able to benefit from this astonishing growth, such as Bob Dylan and John Lennon, who are both known for their use of harmonicas.

His most famous performances are Freight Train Blues, House of The Rising Sun, and Talkin’ New York.

14. The Glass Harmonica is Unrelated to the Modern Day Harmonica

In 1761, Benjamin Franklin invented the mechanical version of the harmonica called the glass harmonica.

Originally called the armonica which came from the Italian word for harmony, this unusual instrument consisted of 37 bowls that were mounted horizontally on an iron spindle.

The foot pedals caused the bowls to spin.

The glass harmonica produces sound when the rims of the bowls are touched by water-moistened fingers while the bowls spin.

The glass harmonica was later banned in Germany.

Despite their similar names, however, the harmonica and the glass harmonica are completely unrelated instruments.

15. The Harmonica was Once Played for 24 Hours Straight!

In 2009, Bonny B. accepted a bet which led him to beat the Guinness World Record and become the only person to play the harmonica for 24 hours straight.

He was able to play without taking a single break.

This took place at the Blues Club in Fribourg, Switzerland.

Bonny used this opportunity to raise and donate money for his school in Cambodia.

16. The Prisoner Harmonica Movie Trope is Based on Reality

A prisoner playing the harmonica is a trope that has become just as common as the prisoner rattling a cup against the bars of his cell.

But, where did this trope originate from?

The most likely answer is that in some prisons inmates can earn certain privileges which allow them to gain access to one musical instrument.

However, their choices are limited to the guitar, harmonica, recorder, or flute.

Some prisoners pick the harmonica because it’s easy to learn.

The harmonica is an extremely unique and interesting instrument. The versatility of this easy-to-learn instrument has made it extremely popular!

It has been used by musicians, actors, and presidents alike!

Harmonicas have broken away from their reputation as instruments solely for the blues and jazz genre.

They have since been featured in many mainstream songs.

This has been made possible by the discovery of the bullet microphone which allows the harmonica to shine even next to louder instruments.