The Horn is a fascinating instrument with its valves operated on the left hand and its bell facing toward the back, to being a fixture in orchestras, wind ensembles, brass and woodwind quintets. Several exciting facts tell that there is more to the instrument than meets the eye.

In this post, we’re going to cover 20 interesting facts about the Horn that you might not have known.

1. The French Horn is Actually Called the Horn

French Horns are actually called Horns and the person playing the Horn is named a hornist or Horn player.

The International Horn Society declared that the French Horn be known as Horn in the English language in 1971 to clarify the confusion in the terminology of the instrument’s name as that many nations often
named Horn.

Some Horn players keep the name French Horn to distinguish it from other jazz and blues world instruments.

Other words for Horn are Horn in F and F Horn.

2. Some Horns Come with an Detachable Bell

Due to the instrument’s awkward shape, the Horn is cumbersome during travel.

To remedy this, Horn technicians have created instruments with detachable bells to make carrying and transporting them easier.

Horn players today have the choice of a fixed bell or detached bell when buying a new instrument.

3. There are Usually Four Horns in an Orchestra

In the modern symphony orchestra there are usually four horns in the brass section.

But, before the Romantic Period in music history, it was common to have only two horns in the orchestra

Then romantic era composers such as Gustav Mahler and Richard Strauss wrote for large Horn sections with some pieces having as many as eight horn players.

The Alpine Symphony by Strauss has eight horns with five to eight extra Horn players on offstage parts.

4. The Horn has a Very Small Mouthpiece

The Horn has the smallest mouthpiece in the entire brass section and its unique funnel shape gives the instrument its unique mellow sound.

The trumpet has the second smallest mouthpiece.

5. The Horn is Not a Standard Instrument in a Brass Band

Although the French Horn is a brass Instrument, it’s not a standard instrument in a British-style brass band.

Horn players play alto/tenor horns in these ensembles and the instruments provide the much-needed alto and tenor voices.

6. Is the Horn Nutritious to Eat?

Like other brass instruments, the Horn is made of brass, but maybe you didn’t know that brass is an alloy of copper and zinc and may include iron and manganese.

These are the same elements found in an average multivitamin!

7. The Horn is the Longest Instrument in the Brass Family

Depending on the type of Horn you have, the instrument uncoiled measures 12 to 13 feet for a single horn to 22 and a half feet for a double horn.

This makes the Horn the longest instrument in the brass family when uncoiled!

The Horn has the broadest range of notes out of any brass instrument.

This instrument a range of about four octaves played by a professional-level musician, with most
of the compositions written is within three octaves.

In a symphony orchestra, the first and third parts mostly play in the treble clef, while the second and fourth
horns play in a combination of treble and the bass clef.

Unlike other ensembles, the orchestra horn section’s parts are unique, consisting of high horn parts being the first and third horns and the low horn parts played the second and fourth horns.

This orchestration is a tradition that dates back to the classical era when, it was standard to use only two Horns in orchestral music.

These two horns often played a supporting harmonic role and had distinct roles in the section.

In the 3rd of Beethoven’s symphonies written in 1803, he added a third horn and wrote the part higher than the second Horn while it stayed lower than the first.

This tradition is used today in many orchestrations, and the Horn section consists of the high Horns being the first and third and the low horns being second and fourth.

10. Orchestral Horn Players are Often Called on to Transpose Their Music by Sight

Although the horn is in F, it is common and expected that many Horn players transpose their music by sight.

Transposing by sight stems from when the player had to change their instrument’s crooks to match the key of the composition played.

When valves were invented and used in the late 19th century, the Horn parts started to be in F and continues to be in F today in modern works.

Earlier pieces often require transposition, and common ones include Horn in E flat, E, D, C, G and A.

11. The Mystery of the Stopped Horn

The right hand serves an essential service when playing the Horn as not only does it control the sound, but it also controls the pitch of notes.

It also is critical in the technique known as stopped Horn.

In this technique, the player completely closes the bell off with their right hand.

This creates a nasal, echo, or sinister sound of the Horn, raising the pitch a half step.

The player fingers the notes down a half step to match the proper notes of the music.

12. The Double Horn is the Most Popular Horn

These days, the Double Horn is the most popular type of french horn played in orchestras and bands.

13. The Horn is Often Found Playing in Woodwind or Brass Chamber Ensembles

With its ability to play delicately and quietly to match a woodwind quintet’s light playing to playing loudly to match a brass ensemble, the Horn is a versatile instrument well represented in chamber music.

You’ll often found it written for in woodwind ensembles despite being a member of the brass family of instruments.

14. The Horn is Very Difficult

The French Horn is generally considered to be the most challenging instrument to play.

When playing the Horn, the hornist needs to consider several things.

These things include holding it properly, the hand being placed correctly into the bell, the lip
tension and the breathing techniques to play in tune.

However, even though it is a beautiful instrument, it is also an unforgiving one.

With its wide range of notes and the very close proximity of the notes, especially in the third octave,
it is easy for the horn player to miss or crack a few notes while playing.

The mistake of missed or cracked notes is very noticeable to both listener and musician.

With a lot of time and patience, the hornist develops a well-trained ear as cracked notes become less of an occurrence.

15. The Condensation of the Horn is a Little More Challenging to Find

As with other brass instruments, the Horn produces condensation from the breath and lip buzzing from the player.

If the player does not empty the instrument when it collects the water droplets, it will have an undesired gurgle to the sound.

Many brass instruments come with a feature that helps remedy the water by using a water key.

By pressing a lever, the key releases the condensation.

The Horn also comes with this convenient feature; however, condensation may still be in the Horn after its use.

Due to this problem, players often rotate their instruments and empty their horns by taking out a few slides.

16. The Horn has a Very Long History

The French Horn’s history spans a very long time back to over 3000 years ago.

From the Shofar and cow horns made of animal horns in ancient times to Lurs made of bronze and wood from 1500-500 BCE, the Horn is one of the oldest musical instruments.

Even though it is one of the oldest instruments, it wasn’t until 1664 when composer Jean-Baptiste Lully
included them in his comedy-ballet La Princesse d’Elide.

Interestingly, you can see french horns in lots of non-musical settings.

A blue Horn also appeared in the pilot episode of the television series “How I Met Your Mother” as a restaurant decoration.

It became a central focus in several episodes involving a couple of characters.

18. There is Such a Thing as a Marching French Horn

But you’re a lot more likely to find marching horns and mellophones in marching bands and drum and bugle corps.

Marching with a french horn is very awkward and cumbersome on the marching field due to its shape and backward-facing bell.

Horn players used bell-front middle voiced brass instruments such as Mellophones and Marching Horns which have forward facing bells and are a lot easier to play while marching.

19. The Horn isn’t only used in Classical Music

Even though the Horn is a staple in symphony orchestras movie soundtracks and music in the classical
genre, the instrument is recently more involved in the jazz, pop and rock genres.

A few examples include The Rolling Stones, “You Can’t Always Get What You Want,” Chicago, “If You Leave Me Now,” and Paul McCartney, “For No One.”

20. Horns are in the Star Wars Universe and Beyond

There are beautiful parts the Horn section has the opportunity to play in the famous Star Wars soundtrack.

There is a connection to the people who played some of the characters.

Ewan McGregor, who played Obi-Wan Kenobi, was a dedicated horn player in his teens and he played
alto/tenor horn in the 1996 movie “Brassed Off.”

Both were in the Star Wars prequel trilogy.

Note that a solo horn featured as Luke Skywalker’s theme; there is one in Leia’s theme which is known as a leitmotif.

Other celebrities that played the Horn in school include Jon Stweart, former comedian anchor of Comedy Central’s “The Daily Show,” and singer, TV and movie actress and entrepreneur Vanessa Williams.

The Horn is truly a unique instrument from its humble beginnings to being featured in soundtracks and a fixture in symphony orchestras.

It is the brass instrument with the most considerable amount of tubing and the smallest mouthpiece.

It blends in and is a fixture in woodwind and brass quintets, and it has a unique majestic sound.

Even though it is the most challenging brass instrument to play, many Horn players agree that it is worth it. 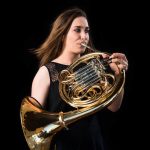