One of the most fascinating instruments out there, the didgeridoo can quickly grab the attention of an entire room. It looks pretty much like a big, long, wooden pipe, and it’s played by vibrating your lips against it to make a droning sound.

The thing with this unique musical instrument is that its history, use, and techniques are pretty unusual. This is why we created this list of fun and interesting facts about the didgeridoo.

1. The Didgeridoo Originated in Northern Australia

The first thing to know about the didgeridoo is that it was first played by the aboriginal peoples of northern Australia.

What’s even more intriguing is that this instrument dates back 40,000 years ago. Mind-blowing, right?

Back then, the people stumbled upon large eucalyptus branches that had fallen and been naturally hollowed out by termites.

As you can see, that was how the initial idea of the didgeridoo came to the surface.

2. The Mayans Were Familiar with a Similar Instrument

It seems like the didgeridoo wasn’t only popular in Australia.

The Mayan people, who resided in Central America, had their fair share of didgeridoo-like instruments too!

However, the Mayans made their musical instrument out of agave or yucca.

Today, people refer to this ages-old instrument as “la trompeta Maya,” which translates to “the Mayan trumpet.”

3. Musicians can use the Didgeridoo as a Pitched or Percussion Instrument

One of the coolest things about the didge is that it’s versatile and depending on the way you use it, you can shift between a pitched instrument or a percussion instrument.

Each didgeridoo comes with a distinctive basic tone.

By altering the movement of your lips and the pattern of their vibrations, you’ll be able to produce a series of overtones branching off the main tone.

If you wish to go for the didge to make a rhythm, you’ll have to try the same techniques that a beat-boxer would use to build up the beat.

This way, the didgeridoo can serve as a bass or even a time-keeping instrument.

4. Modern Didgeridoos are Made with Different Materials 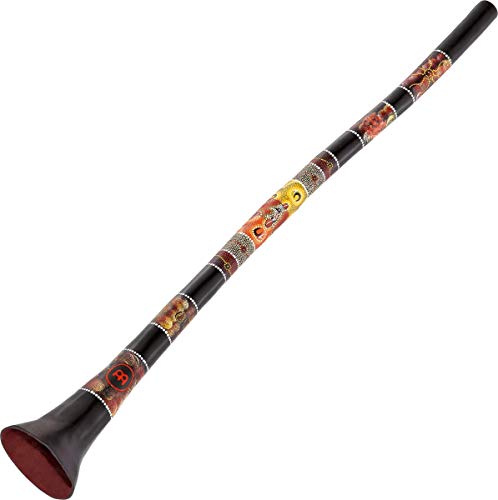 Traditional didgeridoos are made up of hollowed eucalyptus wood branches as well as other types of wood including ironwood, eucalyptus, bamboo, agave and yucca wood.

Yet, modern problems call for modern solutions, which is why didgeridoos are often manufactured from other materials that are easier to form.

For example, plastic and metal are two popular materials to use in didgeridoos nowadays but you can also find them made out of fiberglass and other composite materials.

Essentially, any enclosed column of air can be turned into a didgeridoo once you blow through its opening!

5. The Didgeridoo is Very Long

Like most instruments, didgeridoos come in a range of different lengths.

They can be anywhere from 3 to 10 feet long but the typical didgeridoo will be around 4 to 5 feet, but that’s not all.

One of the curious things about this remarkable instrument is that its length and shape might vary depending on its type and purpose.

For instance, ceremonial didgeridoos tend to be two or three times longer than their regular siblings.

6. Sometimes, a Player will put the End of a Didgeridoo in a Metal Object

For example, the upper end will usually be coated with wax and then resin for some extra comfort and protection from the elements.

Also, players might prefer to place the other end of their didgeridoos inside a tin can to achieve more resonance and volume.

7. There are Numerous Techniques for Playing the Didgeridoo

Remember how we mentioned that didgeridoos are versatile?

Part of their versatility depends on the skills of the player and how they develop their blowing strategies to get the sound that they want.

Some performers like to pull their lips tighter while blowing into their instruments, which leads to an increase in air pressure.

As a result, you’ll be able to hear overtone pitches out of the other end of the didgeridoo.

Others resort to humming and blowing into the instrument at the same time, which produces complex harmonic chords.

You can even beatbox into the didge for some very different sounds!

8. Musicians use Circular Breathing While Playing the Didgeridoo

One thing remains constant when someone plays the didgeridoo despite the variety in style and technique and that is circular breathing.

This method is essential for didgeridoo players to learn to regulate their air intake while blowing into the instrument.

The player will start by drawing gulps of air in through the nose and at the same time, they’ll push air from their cheeks into the instrument.

As a result, the performer will be able to create pulsations, elevations of pitch, and tonal variations.

9. Didgeridoos were only Associated with Certain Ceremonies

Another curious fact about this wonderful instrument is that, for centuries, it’s only been used in a small number of events.

Usually, the didgeridoo was associated with ritualistic ceremonies such as those related to sunsets and other natural phenomena, circumcisions, funerals and healings.

On the contrary, the sounds that came out of the didgeridoo were for teaching and story-telling.

That had been the case for a very long time throughout the history of the Aboriginal Australians.

However, things have changed with the rise and fall of civilizations, and now didgeridoos are used in musical contexts.

10. The Sound of Each Didgeridoo Resembles the Voice of its Tree

One awesome feature of didgeridoos is that their creators didn’t just think of them as tools.

Instead, they believed that each instrument’s sound was the voice of the ancestral spirit of its original tree.

For that reason, they made sure to only make one didgeridoo out of each tree.

Plus, a didgeridoo must be kept in an upright position in order to keep the ancestral spirit of the tree intact.

Most air instruments, such as the flute, follow this rule, which not many people know about.

Some would just assume that if you blow more forcefully into the didgeridoo, the resulting sound will be louder. However, that’ll only lead to you producing less noise!

The only way to make louder sounds is by increasing the resonance, which you can achieve by putting the lower end of the didge in a metal can or using a microphone to amplify the sound electronically.

12. In Some Places, Women Aren’t Allowed to Play the Didgeridoo

Because Australia is a huge place, the traditions surrounding the didgeridoo can differ from one region to another.

Even though the international media believes that Aboriginal Australians don’t allow women to play the didgeridoo, it’s not the case everywhere.

In some areas, it’s downright taboo, while in others, it’s just not the norm.

The word “didgeridoo” has been derived from many sources, and not all of them belong to the same culture.

For example, some believe that it originated from the Irish words dúdaire or dúidire, which, curiously, have various meanings such as constant smoker, eavesdropper, long-necked person, hummer, trumpeter or puffer.

Other scholars think that the instrument was named onomatopoetically by Western people after they heard the amazing sounds that it produced.

14. The Didgeridoo is now Used in Contemporary Music

The greatest thing about today’s music is that it sometimes brings back unusual musical instruments to use in unique ways.

So, it’s not surprising to find instances of didgeridoo sounds in today’s music.

Artists such as Like a Storm and John Butler have used the didgeridoo as a secondary instrument in their music.

Their songs, Love the Way You Hate Me and Take, respectively, feature the unique sounds of a didgeridoo.

15. Some Modern Musicians are Dedicated to Didgeridoo

There’s also a wide range of artists that are specialized in didgeridoo playing, and they have their own fanbases.

Even though the majority of them are Aboriginal Australians, some aren’t. In fact, some didgeridoo musicians aren’t Australian at all.

Besides those, here’s a list of American performers who play the didgeridoo as well:

As you can see, the unusual sounds of the didgeridoo are recognized and loved from their origins in Australia all the way to the United States.

Who wouldn’t want to add some tribal flavor to their music, right?

To Wrap It Up

After reading our list of interesting facts about the didgeridoo, it’s only natural to fall in love with it.

It may not be as familiar to us as a piano or guitar, but that’s just part of its charm!

This big instrument has been used for all sorts of rituals throughout Aboriginal Australia.

And even though it wasn’t considered a musical instrument, the didgeridoo is now a favorite for musicians to include in their songs.

Despite its innocent looks, the didgeridoo requires a lot of practice to master.

Yet, nothing matches the satisfaction that a performer feels after creating their unique sounds with it.