It takes a true musician to know how essential the bass guitar is. Throughout history, countless musicians, like James Jamerson, Bootsy Collins, John Paul Jones, John Entwistle, Carol Kaye, and the likes, have proved that there are endless possibilities for the versatility of a bass guitar.

However, some people can’t even differentiate between a bass guitar and a regular guitar. Also, a lot of people tend to under-appreciate bassists. With that said, in this post, we’ll be sharing 20 facts about the bass guitar that will certainly make you fall in love with it.

However, it didn’t gain popularity until the 1950s when Leo Fender made a bass guitar based on Tutmarc’s ideas.

The popularity of the bass guitar was encouraged by the musicians’ need for a new instrument that can substitute the double bass which was the leading bass instrument at the time.

Leo Fender called his bass guitar the “Fender Precision Bass” because it had metal frets on its neck, which were absent on the double bass.

These frets make it easier for musicians to play precise notes.

Fender’s bass guitar became and continues to be very popular with many bass guitars still designed in the same style.

Bass guitars have five main pieces which are the headstock, the neck, the fingerboard, the body, and the strings.

The headstock, body, neck, and fingerboard are typically made out of wood with the strings being made out of metal.

There are a number of other different parts of a bass guitar such as the bridge, the nut, the pickups, the saddle, the frets, and tuning pegs too.

4. There are Bass Guitars With More Than Six Strings 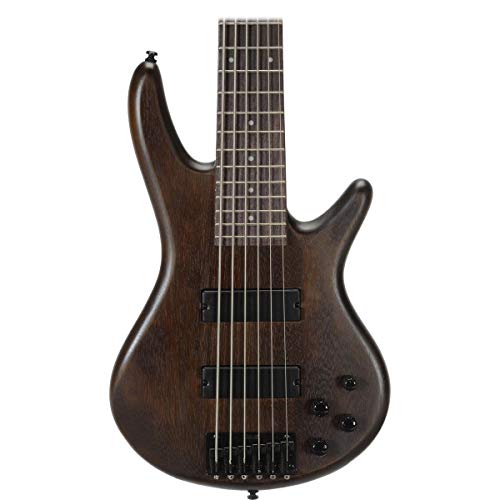 The standard bass guitar has four metal strings, though you can also get models that have five, six, or even eight strings.

It’s not even unusual to see a bass with more than eight strings as there are actually 12-string basses out there!

These models are called extended-range basses.

The standard four-string models are the most common ones, though.

The fretless bass guitar started with Bill Wyman buying a Dallas Tuxedo bass that he hated.

He decided to take the frets and replace them when he could afford to.

But when Wyman played the bass without the frets, it sounded better. So, he decided to never put them back in.

He inspired many like Steve Swallow, Pino Palladino, and Michael Manring.

6. The Pickups Are Either Passive or Active

The pickups on a bass or electric guitar are magnetic devices that are placed beneath the strings.

These devices can be either “passive” or “active.”

When you play the bass, an electric signal is produced that is sent to an amplifier.

Passive pickups send the signal with no additional amplification, while active pickups process the signals through a pre-amplifier.

7. A Bass Guitar Can Have Two Pickups

Some basses are designed to have two pickups: neck and bridge pickups.

These basses often have a switch so that the player selects which pickup to use.

Players can also select a blended signal from both pickups.

Each pickup has different tonal qualities as a result of its placement.

8. Two Forms of the Bass Guitar

The bass guitar comes in two forms: electric and acoustic.

The acoustic bass has a bigger body with a thicker neck and it can produce a clear, rich sound without amplification. It’s less expensive and less versatile.

The electric bass, on the other hand, has a slimmer body and its sound can be amplified and modified.

It’s more expensive than an acoustic bass and is more versatile.

9. You can Play With or Without a Pick

It is possible to play the bass guitar with or without a pick.

The pick (or plectrum) is usually made of plastic.

Playing with the pick produces a sharper sound than when you pluck the strings with your fingers.

The fingerstyle is the most common playing style, though and the bassist will use the ends of their index and middle fingers to pluck the strings upwards.

Players can also use more fingers like using their thumb to pluck downwards.

During the 60s and 70s, bassists started slapping the bass, a technique that involves striking or slapping the strings with the thumb.

However, this technique was popular even before the bass guitar became a thing.

The slap technique is credited to William Manuel Johnson, aka Bill Johnson.

He invented this technique on the double bass and taught it to many bassists during his tours in the early 1900s.

The slap style became more and more popular in the 40s and 50s among double bassists.

The most famous of them all is Bill Black, Elvis’s bassist.

Larry Graham, who turns out to be Drake’s uncle, invented the modern slap bass.

Larry was a part of a trio that included him, his mom (Dell Graham), and Rueben Kerr as the drummer.

When Kerr left the group, Larry bought an electric bass guitar to replace the pump they’d lost by losing their drummer.

He found a way to do that by thumping the lower strings of the bass while plucking the higher ones.

And that was the beginning of the thump and pluck technique.

The Ritter Royal Flora Aurum was built by Jens Ritter, a German luthier.

He carved its body from a rare piece of maple, while he carved the nut from 10,000-year-old mammoth ivory.

This luxurious guitar is also decorated with 24-karat gold and diamond.

Bass guitars are usually made of wood, however, other materials such as graphite and other light materials can be used, too.

Alder is the most common type of wood used to make bass guitars.

Maple and mahogany are also common in making the body and neck of a bass guitar.

Some guitar-making companies and luthiers use exotic woods, such as cocobolo, ovangkol, and ebony.

14. The Crucial Roles of a Bass Guitar Player

A bass player plays an important role in a band.

As a bass player, you’re responsible for linking harmony and rhythm.

You set up the chords for the other players, choosing notes that smoothly lead from one chord sound to the other.

Establishing the rhythm and keeping a steady pulse are other roles for bass players.

If you’re a newbie to music, you might not even know the difference between bass and guitar.

In general, bass guitars are bigger than guitars, however, the guitar has more strings than the standard bass.

The guitar, whether it’s acoustic or electric, has six strings with standard tuning E-A-D-G-B-E (low to high).

The bass is tuned E-A-D-G similar to the lowest four strings on the guitar but with an octave lower.

Also, the bass is longer than the guitar resulting in a lower pitch.

Yes, this is because the bass guitar was made to be a smaller, cheaper version of the double bass.

Musicians were tired of the double bass in the 50s, as it was big and heavy, making it hard to carry around.

It was also difficult to play precise notes on it and make it louder with an amplifier.

17. The Bass Guitar Is Popular in Hip Hop

A lot of people, when they think of bass guitars, think of rock or jazz and neglect the fact that bass guitar plays an important role in hip hop too.

Check out “Hypnotise” by The Notorious B.I.G to listen to the pure power of bass in hip hop.

Also, check out the genius bass line in “Rapper’s Delight” for The Sugar Hill Gang by Doug Wimbish.

Although the bass guitar is often unappreciated, true music lovers always know the importance of a bass line in a song.

If you’re brand new to the world of music, we hope that the above-listed facts have inspired you to appreciate bass guitars more.