What Is The Altered Scale in Music?

If you play or listen to jazz music, you might have come across what is called the Altered Scale.

In this post, we’ll explore what exactly the Altered Scale is, and how to use it in music. But first, let’s go over what a scale is in the first place, and how to create one.

What is a Scale?

A scale is a specific combination of notes, played either ascending or descending in order of pitch.

There are many different types of scales, but the most common kind is the diatonic scale – this means a scale that has seven notes in it (the eighth note has the same letter as the first note).

For example, all major and minor scales are diatonic.

Here are the ascending C Major and C Minor scales, and notice how there are seven different notes in each:

These scales follow a set series of whole steps and half steps, which means that regardless of what note you start on, each following note will always be a specific interval away from it.

In Major scales, the series of intervals (whole and half steps) goes like this – W W H W W W H.

You can start on any note – C#, Eb, A – and use this pattern to find out the major scale that starts on that note.

The Altered Scale that we’re learning about today is specifically a type of ‘Dominant scale’.

A dominant scale (also known as the mixolydian mode) is a Major scale with the seventh note in the scale – what we call the leading tone – a half step lower than normal.

What is the Altered Scale?

The Altered Scale is a Dominant scale in which all of the “non-essential” tones have been altered.

There are three essential tones in the Dominant scale:

This means the remaining four notes – the second, fourth, fifth, and sixth notes – are all “altered”, meaning they are either raised or lowered by a semitone (half step).

Therefore, the C Altered Scale would look something like this:

As you can see, the third scale degree (mediant) – the note E in a C scale – is moved to the fourth position in an Altered scale.

This is because the second scale degree (supertonic) is split into two notes – the Db and Eb in the scale above.

The pattern of whole and half steps in an Altered scale are: H W H W W W W.

It is written as the note of the chord followed by “7alt”, so the C Altered Scale above would be seen in music as: C7alt.

The Altered Scale is used almost exclusively in jazz music.

The Altered Scale is “enharmonically equivalent” (meaning it has the same notes, but they might be written differently, like F# and Gb) to the scale of the Locrian mode with the fourth note (subdominant) lowered by a half step:

As you can see, the C Locrian scale and the C Altered scale are almost the same, the only difference being the “F” note in the locrian scale is a half step higher than the “E” in the altered scale.

Because of the similarities between the two scales, you might sometimes see the Altered Scale called the “Super-Locrian” scale, or the “Locrian flat four” scale.

The Altered Scale is also enharmonically equivalent to the 7th mode (Locrian mode again) of the melodic minor scale.

Summing Up the Altered Scale

That is basically everything you need to know about the Altered Scale.

Now you know how to use it, what notes to play, and where it is most often found if you happen to come across it in class or in a piece of music.

Let us know below if you have any questions or comments! 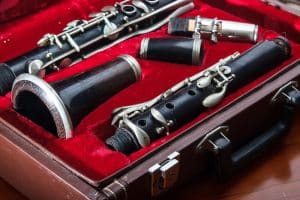 The 10 Best Clarinet Cases in 2021: Reviews And Buying Guide

How to Clean a Saxophone: A Beginner’s Guide

How to Oil Trumpet Valves: A Step by Step Guide